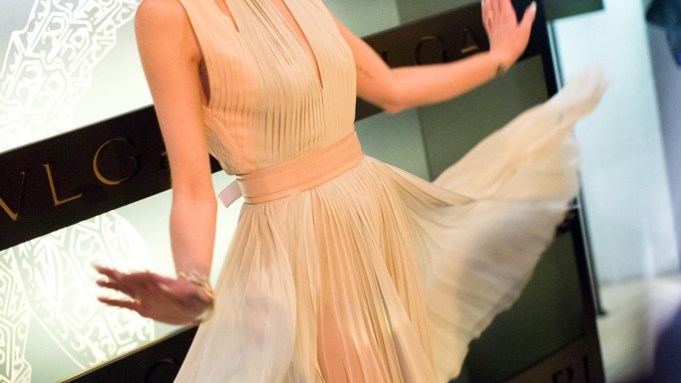 A 220-foot illuminated serpent coiled around the facade of Bulgari’s Fifth Avenue flagship welcomed guests on Saturday night. The stunning Fabien Iliou installation was the first instance, of many, of the evening’s reptilian motif at the store, where the jeweler toasted its Serpenti Collection, an exhibition on display from Feb. 9 to 28. The evening began with an intimate dinner for VIP clients and “friends of the brand,” that well-worn euphemism for the stars who adorn their wrists and décolletage with Bulgari jewels for jaunts down the red carpet.

“Aren’t they cool?” asked a wide-eyed Olivia Wilde during cocktail hour, holding up her bedecked forearm. “I just wore this same collection in a film and I had no idea that I was getting them again tonight. I was saying earlier, ‘I think I’m meant to own these. It’s fate.’”

On the other side of the room, Uma Thurman eyed a shimmering gold and diamond snake belt in a display case, staged as if to appear midpounce. “I love snakes,” the actress said. “I wear snake rings all the time. I’ve even played a person who had snakes on their head. The snake is a powerful, medicinal, ancient creature.”

Guests were ushered upstairs where various white-hued flushes — peonies, lilies and roses — topped an S-shaped dinner table. A bass, banjo and saxophone trio provided jazzy tunes while magician David Jarre captivated the table. “How did you do that?” Julianne Moore squealed after Jarre had, magically, slipped his own watch onto her wrist without her noticing.

Afterward, diners made their way downstairs, where Champagne-wielding revelers bopped to DJ Mia Morretti’s tunes. Analeigh Tipton arrived, beaming as a lengthy serpentine puppet slithered through the crowd. Moore turned in early but not before considering her fashion week agenda. “It’ll depend on the weather,” she said judiciously. “And my children’s schedules.”