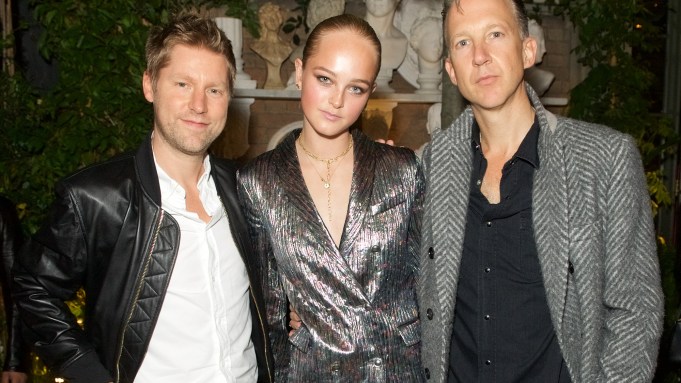 NETFLIX ‘N’ CHILL: At the close of the London chapter of show season, Burberry and Dazed magazine threw a party at the brand’s new show space, Makers House, to celebrate the unveiling of a new issue of Dazed featuring Burberry’s new campaign face Jean Campbell. In the packed “sculpture garden” courtyard created for the show, fatigued fashion people were starting to fantasize about their Netflix accounts, including Lottie Moss, who has had very busy year.

“I like to just sort of sit at home and pig out and watch Netflix,” she said. “I watch ‘Stranger Things.’ I literally watch all of the series [on Netflix]. I’m obsessed with ‘Orange is the New Black,’ it’s so good. ‘Stranger Things’ is really good; it’s got Winona Ryder in it. It’s like sci-fi, and it’s quite scary, but it’s not super terrifying.”

Kate Moss’ 18-year-old half-sister, now managed by Moss’ old agency Storm, has certainly earned some time off. After completing her A-levels (a series of exams that all British teens have to finish in order to leave high school and university), for which she studied in between red-carpet appearances during the Cannes Film Festival, she made her long-awaited debut into the fashion world, starring on the May cover of Vogue Paris with Lucky Blue Smith, is working with Bulgari on its #RaiseYourHand campaign for Save The Children, became a member of Fendi’s elite coterie of beautiful and talented influencers, and she has several campaigns and projects in the pipeline.

She’s also in the market for an interior designer. “I just moved into a new flat and I really want to make it really homely,” she said. “So I’m going to get on Pinterest and get some ideas up because I want to get a decorator in to do stuff.”

Royal Ballet soloist dancer Eric Underwood had different ideas about essential Netflix viewing: “Not me. I couldn’t do ‘Orange Is The New Black’, I watched one episode and thought, ‘No.’ ‘Oz’ is more my thing,” he said with a wink. Underwood is about to appear in “Carbon Life,” a contemporary piece with music by Mark Ronson and Andrew Wyatt, and design by Gareth Pugh.

“I like dancing the classics because they keep you in shape because the training is so regimented; The other ones you have a little more individual opportunity,” he said. “My favorite roles have been Tybalt in ‘Romeo and Juliet.’ That was amazing. I like the bad guy roles; I do a great bad guy face. It’s like method acting.”

Is he ever intimidated by having David Bailey as a father and critic? “No, never. I just think about what Andy Warhol said, which is, ‘When you do something exactly wrong, you always turn up something,'” he said. “So if my dad tells me that that picture is s–t, then I know that it’s good. That’s just his opinion of it, it doesn’t mean it is right.”