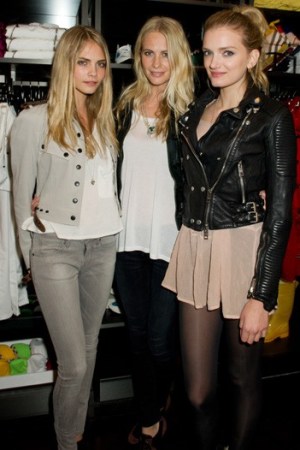 LONDON — Burberry has planted a flag for its Brit brand by opening a store in London that serves as both a sprawling boutique and a sometime music venue. To underline Burberry’s, and in particular Brit’s, ties with the music world, Burberry chief creative officer Christopher Bailey marked the store’s official opening Thursday by tapping rising London indie band Life in Film to play a set.

“Music since the beginning has been linked with Brit, so it’s just a natural thing to do to make it a part of this world,” said Bailey at the party. “It’s a store, but it’s also a venue for young British acts.”

Indeed, the store itself has been designed to be performance-friendly — the shiny black lacquer and polished chrome fittings can be moved to create “stage” areas, while the space has been wired with an enhanced audio system. There are also touch-screen video walls throughout, which play content such as Burberry’s artfully filmed acoustic sessions with emerging music artists, and can live-stream the content.

The London store is the seventh for the Burberry Brit brand since the luxury goods group launched the retail concept in 2009. The London opening follows Brit stores in locations including Bleecker Street in New York; Santa Monica, Calif., and Corso Venezia in Milan. Burberry plans to host music acts at its U.S. Brit stores in the future, too.

And Covent Garden, Bailey added, is an area that attracts a “young customer,” who’s culturally well versed. “It’s a customer that’s into music, they’re into art and design, you’ve got [the Apple store] just around the corner, so there’s lots of synergies,” he said. “We felt that if we could find a great location where [Brit] could sit, then we would open these stores.” And to appeal to the area’s music and tech-savvy customers, they can play their own iPods on docking stations in the changing rooms, and can flip through Burberry Brit look books on some of the touch screens. “They’re customers that come in and know what they’re looking for,” said Bailey.

The party on Thursday was crammed with the young, hip types the label caters to. Guests including Lily Donaldson, Poppy Delevigne, Julia Restoin Roitfeld, Amber Atherton and spring 2011 Burberry faces Cara Delevigne, Tali Lennox and Sophie Kennedy-Clark all gathered to take a gander at the store and listen to the band, as they sipped Champagne or bottles of cider. “It brings together everything Burberry does,” said actress Kennedy-Clark. “It’s music and fashion, it’s a little bit modern and a little bit vintage.”

Bailey said the label is “thinking about” opening further Brit stores, but declined to elaborate on specific locations. Burberry is developing a large retail space on London’s Regent Street, and the label is also plotting a major event for the fall, though details of that are still under wraps.

And given Burberry’s high profile in the real and digital spheres, bid talk continues to swirl around the company. Last week, Burberry’s shares rose on continued talk of takeover interest in the label. But Bailey noted Thursday. “There has been bid speculation for the last two or three years. Certainly as far as we’re aware, we’re not taking [it] very seriously,” he said.