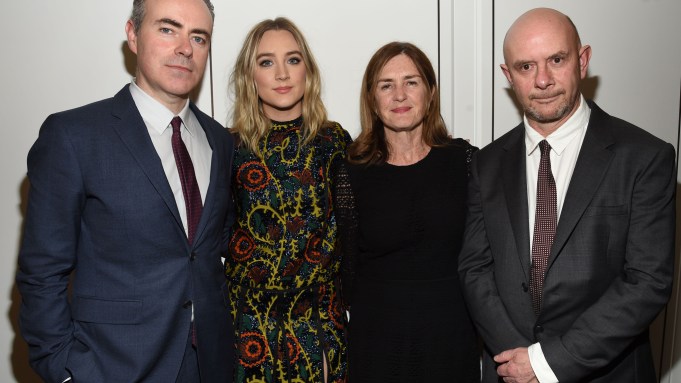 Crowley said the actress was his first choice to play Irish immigrant Eilis. “She was the exact right age, and she had done a phenomenal amount of work but had yet to do a performance that could take her from being a young girl to being a woman. It was an amazing opportunity for her to show that,” he said.

Many critics have noted Ronan’s expressive face, which prompted Crowley to say, “She could have been an amazing silent movie actress. There’s an internal quality to her, that when you look at that face you have access to her emotions.”

Ronan said the film had a high degree of authenticity due to Crowley’s Irish roots, not to mention her own Emerald Isle provenance. “I think it needed a director who had a similar background and John could manage everything we did in a technical way and still be humble about it.”

The actress was surprised that the film’s embrace had been so widespread, saying, “It’s such a traditional style of storytelling and usually that’s not very commercial nowadays.” Added Crowley, “You don’t go into it thinking, ‘Oh, the marketplace is going to mop this up,’ but it’s finding an audience who are a bit turned off by all the violent films. I thought I was making a sad film about immigration but it turns out I’m a romantic.”

Ronan not only has a whirlwind awards season ahead of her, she begins rehearsals for “The Crucible” on Broadway in two weeks. “I’m trying to balance all this madness with getting into that place,” she said. For moral support, her mom came with her to Los Angeles, and was doing what any good mother would do — cooking up a roast chicken back at the actress’ apartment. Ronan had better keep her strength up—the first “Crucible” preview is Feb. 29, the day after the Oscars.