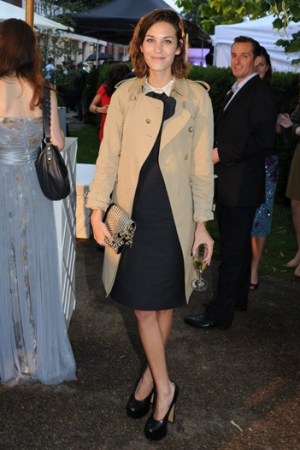 It takes more than Britain’s signature summer drizzle to stop London’s social set from gathering at the Serpentine Gallery’s annual summer party. Guests at the event Tuesday night, which was co-hosted by Burberry, donned their floor-sweeping gowns and spindly heels with abandon, and instead added practical accessories.

“I’ve brought my own umbrella,” noted India Hicks, conscious of protecting her Ralph Lauren ruffled, floral dress. The model and social was in London waiting for her children to finish school for the summer.

“It’s great,” she mused of spending a spell in the city. “I can do all the parties and then go home and eat boiled eggs in front of the TV for the next three months.”

The focal point of the evening was this year’s pavilion, an imposing black structure with a lush garden hidden at its center, designed by the Swiss architect Peter Zumthor. Guests including Poppy and Cara Delevingne, Julia Restoin-Roitfeld, Erin O’Connor, Grayson Perry, Tracey Emin, Alexa Chung, Bianca Jagger, Margherita Missoni, and Ewan McGregor all turned out to wander through its dark corridors and mingle around the edges of its garden.

Earlier in the week, Zumthor said during an interview that he wanted to create a space where people, “Don’t feel they have to put up a façade, a quiet space that fights the noise of the city.” He admitted, too, that he knows nothing about plants, but told the Dutch garden designer Piet Oudolf he didn’t want something worthy of the Chelsea Flower Show. “What I wanted was ordinary plants, the kind you find in your backyard,” he said. Model Cara Delevingne pronounced the pavilion as “Very zen.” Grayson Perry — dressed as his alter-ego, Claire — had a more nuanced take on the structure, which he cryptically described as “Japanese meets Tudor tennis court.”

“I think it’s the best for years, it’s substantial,” he went on. “I didn’t like the airy-fairyness of a lot of them in the past.” Perry said he’s working on a television show, though he declined to go into more detail, and is curating an exhibition due to open at London’s British Museum in October, called “The Tomb of the Unknown Craftsman,” which will include his own works alongside those drawn from the museum’s collections.

As guests sipped Champagne and dined on mini dishes of sea bass, they took in performances by artists from Burberry’s Acoustic initiative, including Misty Miller, One Night Only and Life in Film, who played on a stage next to the pavilion. But for Lily Donaldson, the social whirl was something of a distraction from the architecture.

“I’m looking forward to coming back when there’s a few less people and having a chill out,” she said with a smile.

As the evening wore on, guests including Pia Getty, Marina Livanos, John Taylor, Karen and Ferdinand Groos, and Marissa and Michael Sackler — who are bankrolling the Serpentine’s new, Zaha Hadid-designed gallery that will open next year — gathered for dinner at unofficial after-party at the Beauchamp Club.