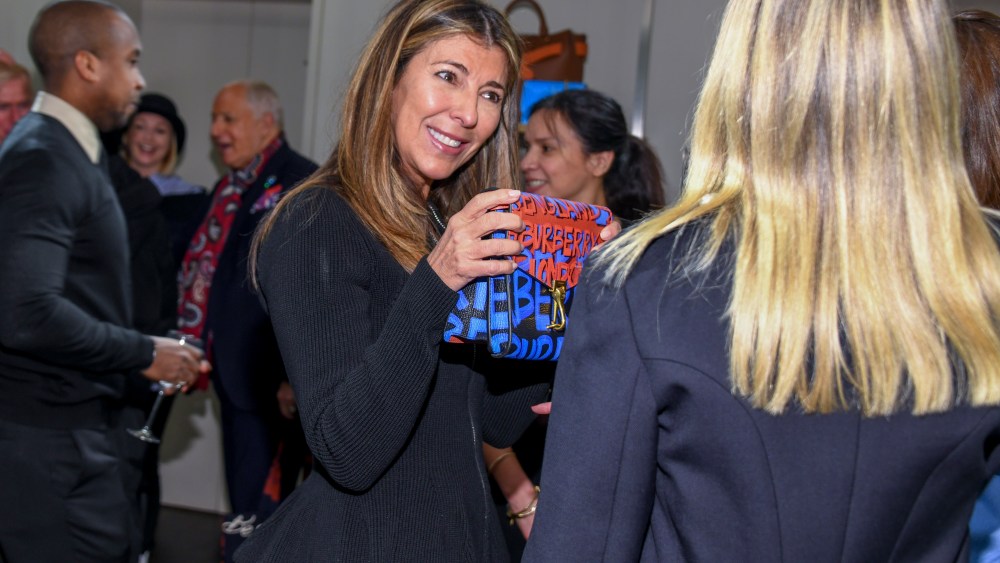 The demise of print was not a topic of conversation, nor did it seem to be on attendees’ minds during Wednesday night’s party celebrating the return of Nina Garcia at Elle Magazine. On the third floor of the Burberry flagship in Manhattan, a crush of guests squeezed together, clutching glasses of Veuve Clicquot and sizing each other up. Elle — which brought on Garcia as editor in chief in September following Robbie Myers’ departure — chose Burberry as its venue for the event as the brand was featured in a special section in the magazine photographed by Julien Boudet. Lining the walls inside the store were photographs from the spread, which depicted a mix of models and laypeople in Japan wearing the iconic trenchcoat inside-out. Takes on this idea were available for partygoers to try on and they did so, with gusto, then had their pictures taken in a room designated as the photo booth.

Among those greeting Garcia was Theodora Richards, dressed in a complete Burberry fit of ath-leisure cropped top and ballskirt. “But not the hat!” Richards shouted over “Once in a Lifetime” by the Talking Heads thumping from nearby speakers. “The hat’s not Burberry. Shush! And not the shoes.” With the energy of a wind-up toy, she hugged Garcia and squealed with delight when she realized they’d worn the same purse.

“It has to do with revitalizing a brand and a legendary title that’s got a lot of character,” he said. “Sometimes making something more elegant can be seen as revolutionary, just by upping the notch on the refinement and the taste level.”

Elle and Burberry threw the party to celebrate Garcia’s first cover, which features Angelina Jolie. Her second cover, for the April issue, is Kim Kardashian, a move that drew intense backlash on social media. But Garcia defended her decision.

“Disregarding her reach is kind of short-sighted. I don’t know why we would ever not include Kim in the conversation, when she is part of our conversation daily,” she said. “When I read once that Elle wouldn’t have Kim on the cover, I was kind of astounded by that. She’s here, and she’s done really well. And she’s a woman. She is a voice that can’t be ignored.”