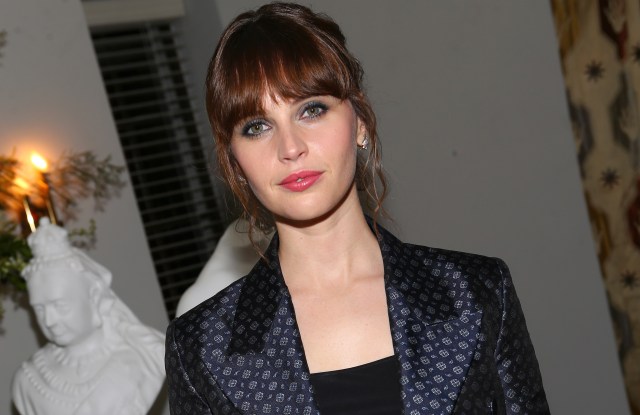 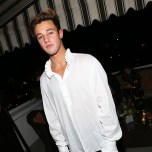 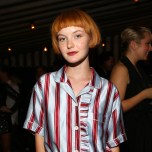 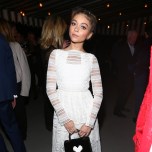 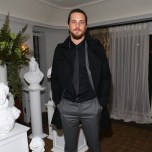 It would have been a feat for anyone to pull a crowd on Thursday night in Hollywood, as the event-heavy month of October comes to its peak, but as usual Chateau Marmont drew the lion’s share of happenings. Chief among them was Burberry and Vanity Fair’s pre-Britannia Awards celebration in the penthouse that honored Felicity Jones, this year’s recipient of “The Britannia Award for British Artist of the Year Presented by Burberry.”

The Oscar-nominated ingénue is no stranger to the fashion brand, having appeared in its fall 2011 campaign, and attending the same event two years ago in support of her costar Eddie Redmayne, who took home the Best Actor Oscar that year.

“They’ve been very good to me over the years,” she said. “Tonight I feel like a giant diamond,” she said of her foulard-patterned jacquard suit.

RELATED: To see more of Jones’ Burberry looks over the years, click here.>>

This year, Jones’ “Rogue One: A Star Wars Story” costar Alan Tudyk was the first actor to arrive at the party to support her, with new wife, actress Charissa Barton, in tow.

“I wonder how many people they’ve fit in here at once? I bet they’ve had people climbing up the sides,” he mused as he rode the tiny, cagelike lift to the sixth floor.

Coppola and her mother Jacqui Getty came prepared for the rumored rain with trenchcoats, but they quickly shed them once inside the warm apartment.

Downstairs in the garden, there were more designer happenings, as Agent Provocateur creative director Sarah Shotton hosted a dinner and Alessandro Michele and Jonathan Simkhai also dined with colleagues. Michele was in town prepping for Saturday’s Art + Film gala, the star-studded LACMA benefit that caps off the month-long party marathon.