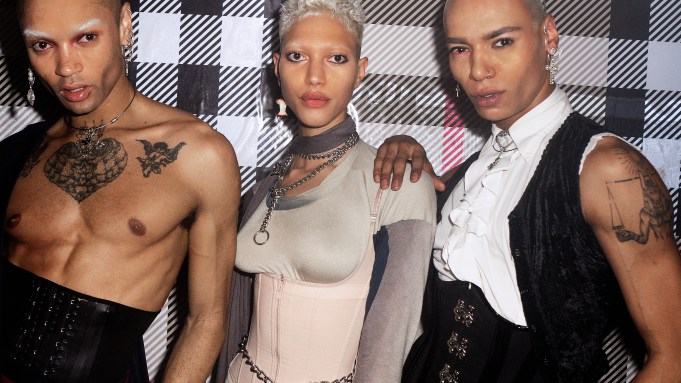 RETRO FIT: Vivienne Westwood turned back the clocks on Friday night, returning to London’s King’s Road, the former hub of punk culture, for a rave to mark the launch of a collaboration with Burberry.

She hosted the party at the Chelsea Sorting Office with her husband and design collaborator, Andreas Kronthaler, and Burberry’s Riccardo Tisci.

The King’s Road — now home to designer shops, pricey places to eat, and rich banker types — hadn’t seen a party like this for years, what with the topless male dancers gyrating on platforms and pierced, wild-haired guests channeling the spirit of the Sex Pistols. There were some ruffle-clad New Romantics in the mix, too.

Asked about working with Westwood, Tisci — who was happily filming M.I.A’s performance on his phone — described the process as “wonderful, beautiful. It was one creative speaking to another creative.” He said he first fell for Westwood years ago — in Milan — when he saw one of her men’s shows, which were utterly wild by that city’s men’s wear standards.

The collection, which supports the charity Cool Earth, launched online and in some Burberry stores last Thursday. It is inspired by Westwood’s collections, reimagined in Burberry’s vintage check.