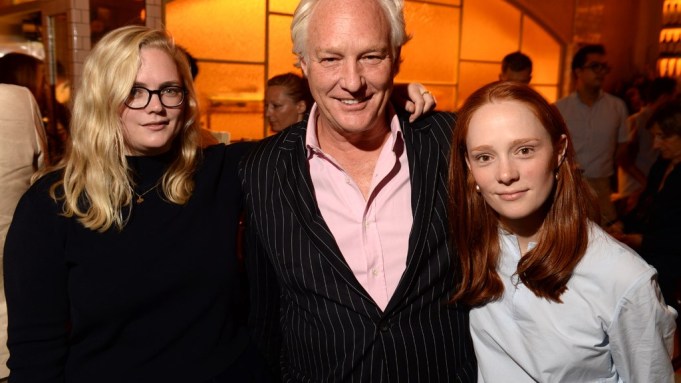 A year after their tug-of-war over prepackaged preppy, both Christopher and Tory Burch played nice at a cocktail and dinner party toasting Trademark’s new store, a milestone for the burgeoning brand from the Chris’ daughters (and Tory’s stepdaughters) Pookie and Louisa Burch.

McNally’s spot was largely the same as former occupant Pulino’s — all white tiles and glowy, basketball-sized light fixtures, coating diners in a filmy sepia tone. They serve frog legs now instead of pizza.

Both Burches (along with Susan Cole, Chris’ first wife and the girls’ mother) played proud parents, fading into the background and letting Pookie and Louisa shine. “None,” Tory said when asked if she was consulted on the store design. “They did it all themselves and I’m incredibly proud.” On the opposite end of the room, paterfamilias echoed the same laissez-faire policy. “Not one bit of input. This is 100 percent their project,” he said. He had only seen the finished space an hour or so earlier, during the in-store cocktail that preceded the dinner. “Swear on my life,” he said. “I had and continue to have total confidence in them.”

Granted, it was easy for the Burches to keep their respective corners. The restaurant was packed — Olivier Theyskens, Harley Viera-Newton, Trish Goff, Leigh Lezark, Patrik Ervell, Erin Beatty and Ashley Olsen all made an appearance. The room growled with the expected small talk: polite compliments on the store floated by timely whimpers from the editorial contingent (e.g., “I can’t believe fashion week’s here already,” and various iterations, thereof). Outside, a gaggle of scenesters fluttered around a ring of cigarette smoke. “I have sooo many fittings tomorrow,” one whined. “I have to wake up at like, 8 o’clock.”