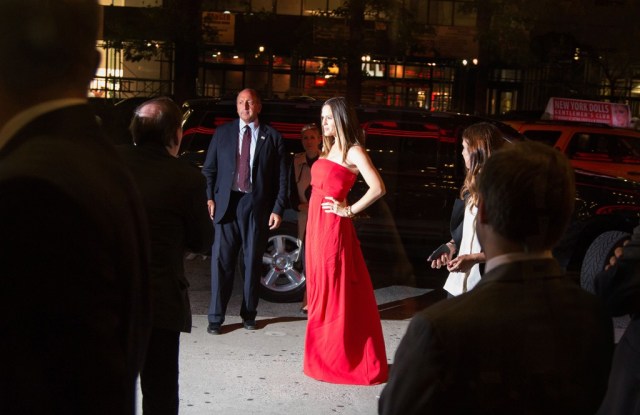 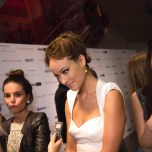 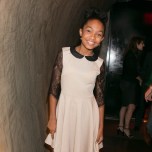 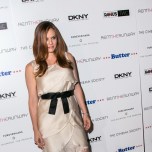 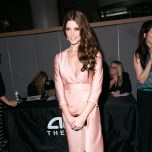 The threat of rain forced the red carpet at a Cinema Society screening of the swing-state spoof “Butter” indoors on Thursday, but the clouds looming in New York did not deter Ashley Greene’s wardrobe choices.

“I figured, ‘Eh, umbrellas,’ but thank God,” Greene said. “That would not have been fun.”

Fashion and politics were both up for discussion at the screening, which was cohosted by DKNY and held at the AMC Loews Lincoln Square. Centering on a butter-carving competition in a conservative Iowa town, the film serves as a political satire, just in time for the 2012 presidential election. “Modern Family” star Ty Burrell raved about his character’s Romney-esque style.

“He’s almost wearing mom jeans, like he’s completely given up,” Burrell said. “[But] I don’t think there was any conscious attempt to draw from [the candidates]. It was just drawn from men who’ve given up. They just go straight to the mom jeans.”

“My favorite look was this white skirt and a blouse that had horses all over it,” the Gucci-clad Garner said. “Right before we were shooting, I opened my arms and a button popped. It was a scene with Hugh Jackman and my button popped, so my boobs…well, they were there. It happened by accident, but we ended up leaving it in the movie because it was so funny.”

That little wardrobe malfunction paled in comparison when talking costumes with Olivia Wilde, who plays a stripper with a heart of gold.

“My wardrobe for this film could fit in a thimble,” Wilde joked. “I asked the strippers in Shreveport [La., where the movie was filmed] where they bought their stuff. It was like Halloween — I got to put on so much fishnets and G-strings and glitter.”

The actress, donning a white cap-sleeve Alexander McQueen dress, seemed excited to spot costar Alicia Silverstone. The two embraced and huddled in private conversation among the chaotic red carpet. Wilde was not the only “Butter” star pleased to see Silverstone. The film’s youngest lead, 12-year-old Yara Shahidi, credited her new diet to the vegan “Clueless” alum.

“I became a pescatarian because of Miss Alicia Silverstone,” said Shahidi. “She didn’t tell me [to become one], but she was just having such lovely meals.”

And while the young actress was out on a school night, Shahidi said her family still maintains some strict rules.

“My brother is nine, so he can’t see this movie,” she said, referring to the film’s racier scenes (including a much-buzzed-about love scene shared between Wilde and Greene). “But he was on-set for a while and was like, ‘That’s cool.’”