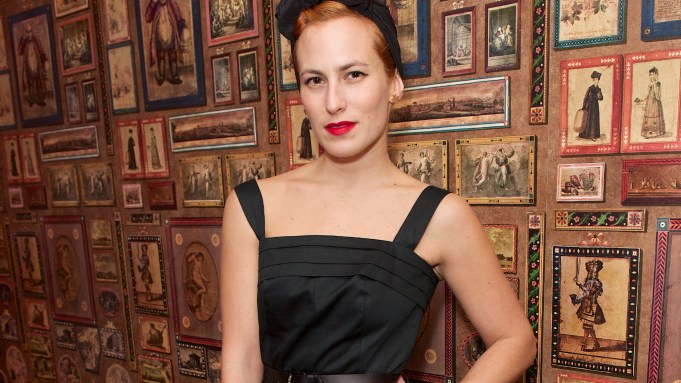 The event took place at George Bamford’s studio in West London, where the walls were covered with the Cabana wallpaper, an eye-catching montage of frames with a personal backstory. All items at the dinner can are for sale on 1stdibs.com.

“The design was originally a screen that my parents found in a flea market in California in the Seventies during their honeymoon,” said Mondadori Sartogo. “They brought it back to Milan, and when they were decorating their house with Lorenzo Mongiardino, they showed it to him and he said it was fabulous, but he was going to turn it into two beautiful cupboards. So the story is that Mongiardino turned it into a cupboard, and we’re turning it into wallpaper.”

Two long tables were covered in a mish-mash of patterned tablecloths and set with clashing crockery, all of which was to be sold from Thursday as part of a larger, virtual pop-up shop sourced and curated for 1stdibs.com by Mondadori Sartogo.

“In the magazine, we mix different rooms from different houses, maybe in a crazy way. We rearrange them in what we feel is an ideal home,” said Mondadori Sartogo. “That’s what we’re doing here tonight, mixing all the different plates and glasses, and hopefully having fun.”

“I think it’s been beautifully done,” said Nicky Haslam. “Beautifully lit and no music — thank God. I hate music at dinner. It drowns out things. This is truly civilized. Almost like a dinner in the Seventies in Rome.”

“I’m praying for Christmas to come soon,” said Dellal. “I’m normally here every year, but this year we’re going to Argentina. I’ve never been so I’m excited. We’ll fly into Buenos Aires then going to a friend’s farm to sit in the garden doing nothing.”

King, who owns restaurants including The Wolseley and The Delaunay with business partner Chris Corbin, can now add hotelier to his résumé: His new London hotel, The Beaumont, has just started taking guests.

“It’s another dimension because it’s 24 hours, not just two or three,” he told WWD. “I love it; it’s a very different discipline.”

King revealed there’s a new hotel project up his sleeve.

“We’ve got another hotel lined up for London, but it’s very tricky,” said King, adding that he has hopes to open a New York hotel in the future. “Buying a hotel is incredibly hard at the moment. Everyone is seeking to open, so we may look at running a hotel for an existing operator.”

Italian furniture designer Gamper will soon be heading to Rome for the opening of a group show at Maxxi, but before then, he’s putting the finishing touches on his home.

“We’ve built another floor above our studio in Hackney,” he said. “We’ve been working on it for about a year, and we’re moving in in 10 days. Quite exciting.”

After Christmas, he will head to New York for the opening of a show at Anton Kern Gallery.

“It will be my wife’s sculptures on top of my tables,” said Hackney.

Then, he is working on a collaboration with Dedar, which will be completed in time for Milan’s Salone del Mobile in April.

The Visual Clinic cofounder Kinmonth had been spending a lot of time at Chatsworth House, the seat of the Duke of Devonshire.

“I’m doing an exhibition that’s all about 500 years of style at Chatsworth,” he said. “The collections at Chatsworth are amazing because they’re all about people bringing things to the family. There was one Duchess who arrived with 65 drawings by [the architect] Inigo Jones — can you imagine!”

The Cabana designs for Dedar will also be sold in Dedar showrooms in London, Paris, Milan, Munich and Moscow.