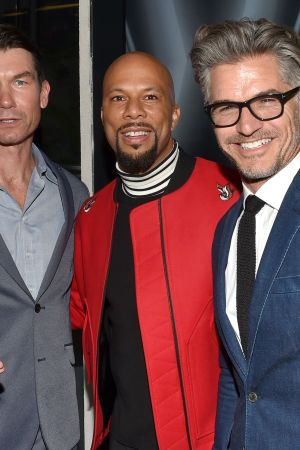 It’s round three for New York Fashion Week: Men’s, and this time the week opened with a party at the Cadillac House, a new public space that’s located on the ground floor of the brand’s New York headquarters at 330 Hudson Street.

The crowd was sprinkled with designers — Todd Snyder, Timo Weiland and others — along with this season’s brand ambassadors: actors Jerry O’Connell and Kellan Lutz, Olympic snowboard and Olympic Gold medalist Sean White, model Eric Rutherford and New York Knicks player Carmelo Anthony. Nick Cannon, who isn’t an ambassador, also made an appearance.
Post party, the Cadillac House, which is a short walk from the main venue of the week Skylight Clarkson Square, will turn into Platform 4 and host shows by brands including Gypsy Sport, Engineered for Motion and Assembly New York. The space will also house a Retail Lab, a three-year program that will support designers by offering them a retail store for three months in addition to a $75,000 grant and mentorship from people within the industry. First up for the lab is Timo Weiland, whose store opens to the public on July 15.
The night ended with a performance from Common.
cfda