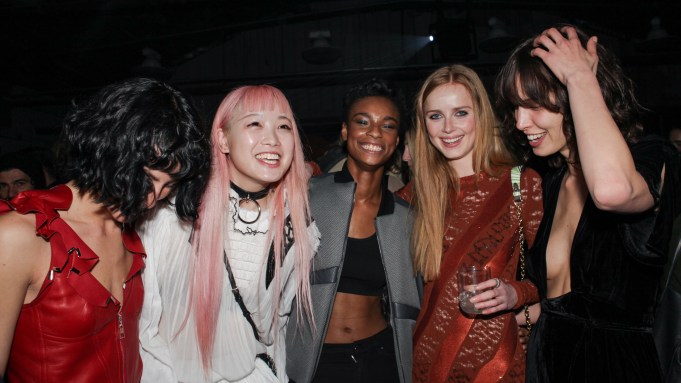 There are only so many parties at the Boom Boom Room the fashion world can take, so when an invite for Calvin Klein and Dazed Magazine’s joint party arrived with an address in Bushwick, sleepy editors perked up a bit. Despite having to travel into the depths of Brooklyn and waiting in line in freezing temperatures, the likes of Emily Ratajkowski, Jessica Hart and Stella Maxwell turned out to celebrate the launch of the Dazed 100 — a list of artists, musicians, actors and models dubbed the “creatives shaping youth culture,” according to the magazine.

“I love anytime that any brand is celebrating an artist doing amazing things. It’s always so important to celebrate the community,” said Cleo Wade, who arrived with Margot, Mia Moretti and Liza Voloshin, all wearing T-shirts that read “Hillary Clinton is a badass,” which Wade designed. Who says Clinton can’t get the youth vote?

Many people said they had been taking it easy this fashion week. “The only show I’m going to is Opening Ceremony,” said artist Petra Collins, though she came to Friday night’s party (wearing a Calvin Klein sports bra), because “I love Calvin, and I’ve been the biggest fan of Dazed since I was little. It’s the magazine that I looked at to see counter-culture, so it’s cool that Calvin and Dazed are doing stuff together. The thing about Calvin Klein is, in the Nineties it was so shocking and cutting edge, and Dazed is that now and I feel like Calvin needed that reboot. It sort of makes sense.”

Singer Kelela took the stage around midnight, which is when crowds started piling in and the line outside grew longer. But Ratajkowski was calling it a night.

“This is a really cool event; it’s a little bit different. It was a trek but it was worth it,” she said. “They [sent] a car which is totally sassy, but we did it.”