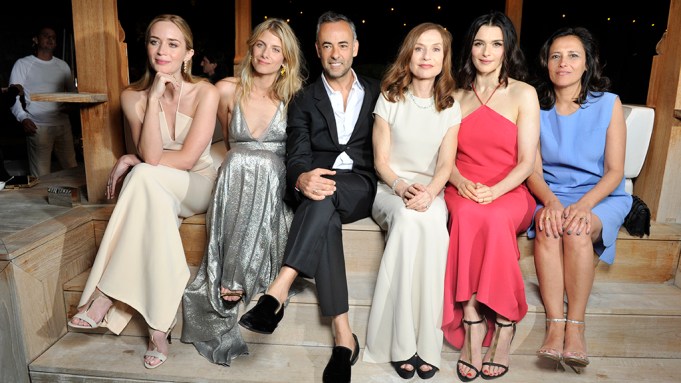 CANNES, France — If female empowerment is the hot topic at the Cannes Film Festival this year, it’s old news to Calvin Klein, which is marking the fifth year of its partnership with the Independent Filmmaker Project.

Guests gathered at a villa in the hilltops of Cannes on Monday night for their joint Women in Film event, which celebrated Emily Blunt, Rachel Weisz, Isabelle Huppert, Mélanie Laurent and Sienna Miller, a member of the Cannes jury.

“I think women are being much more recognized. Of course, it’s still an issue, but I think little by little, a lot of people are getting behind it and voices are getting heard,” said Calvin Klein Collection creative director Francisco Costa.

Judging from the ladies in attendance, the fairer sex is doing just fine.

Weisz has two films in competition: dystopian tale “The Lobster” and Oscar winner Paolo Sorrentino’s “Youth.” The latter has yet to screen, but a teaser clip of Michael Caine and Harvey Keitel watching a naked young woman joining them in a swimming pool has set tongues wagging.

“Actually, it’s not really about the body — it’s about the spirit,” Weisz said of the movie’s title. The British actress might as well have been referring to the feminist debate raging here. “I think it’s pretty sad that we need to have this conversation, but we do, so I will raise it. I mean, slowly, slowly, things are progressing,” she said.

Huppert, who has twice won the prize for best actress in Cannes, also has two contenders vying for the Palme d’Or. She plays a war photographer in Norwegian director Joachim Trier’s “Louder Than Bombs,” and teams up with Gérard Depardieu in “Valley of Love.” The veteran took a suitably laid-back approach.

“I have never been very nervous presenting my films because cinema is a collective art by definition, so the nervousness is shared by many, many people: the director, the producers, the other actors. You don’t carry all the weight on your shoulders,” she remarked.

Blunt was preparing for the following day’s presentation of “Sicario,” a thriller costarring Benicio del Toro in which she plays a FBI agent in the war against drugs. “She packs a gun. She’s not sitting at a desk. She’s on a SWAT team, you know? She’s the real deal,” Blunt said.

“I learned a huge amount just speaking to women who have lived through it and experienced it and what it takes in a male-driven world, what it takes in a dangerous world — how does that make you feel, what does that do to your family life? It was just really wonderful to get a very truthful tap on what it is to be a female cop,” she said.

Laurent had just walked the red carpet for the screening of the well-received Pixar animated movie “Inside Out.” She features in the French version — a talent that runs in the family. “In fact, my dad is a voice actor, so I grew up in that world,” she said.

The “Inglourious Basterds” star has wrapped filming on Angelina Jolie’s “By the Sea,” scheduled for a November release. “She is an amazing captain and she is absolutely marvelous both with her crew and her actors. She protects them, she wishes them well and she really knows what she wants. It was a joy to work with her,” she said.

Natalia Vodianova made a special appearance to celebrate her new campaign for Calvin Klein Euphoria, 10 years after her debut as the face of the fragrance, but she wasn’t feeling nostalgic.

“Actually, I look younger. It’s really funny. I think it’s the fact that we took the campaign outdoors and actually in the tropical environment, and in front of the sea, and shooting it outside just made it feel fresh and more alive. In a studio, it’s never the same thing,” she said.

The Russian model, who starred in the 2012 adaptation of the classic French novel “Belle du Seigneur,” said she would not be returning to the big screen.

“I really made a decision not to,” explained Vodianova, who last year gave birth to her son Maxim with partner Antoine Arnault. “It just doesn’t suit me. I have my charity, I have my children and I have Antoine who I love so much, and I want to preserve what I have rather than keep looking for something else.”