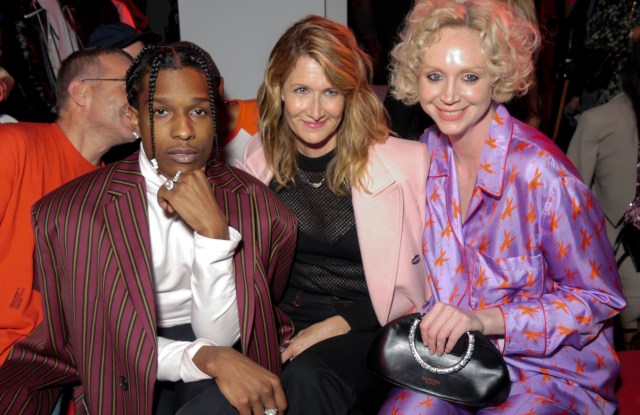 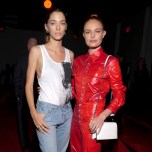 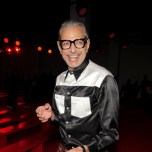 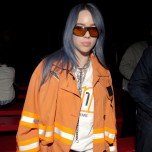 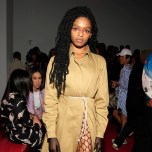 Have any questions about Calvin Klein’s front row lineup? Jeff Goldblum has the answers. The actor was a prompt arrival for the 8 p.m. show, and knew exactly who else to expect at the show.

“Here, I’ll tell ya,” said Goldblum, pulling up a list on his phone.

“Jake Gyllenhaal and Saoirse Ronan, with whom I did that great movie with the great Wes Anderson, ‘The Grand Budapest Hotel.’ Rami Malek — come on! Laura Dern, I did that dinosaur movie with, I know her well. Trevor Noah, Millie Bobby Brown — fantastic, she’s sitting near me here. A$AP Rocky, come on! George Condo. Wonderful painter. Do you know George Condo’s painting? Spectacular and important painter. Cindy Sherman, I’ve been a great fan of and a photographer who takes pictures of herself, and she’s a great artist and I’d love to see her. Rowan Blanchard, spectacular, Naomi Campbell, Gus Kenworthy — a fantastic skiier, brave, brave soul. Kate Moss; Russell Westbrook, I admire, he’s a great superstar. Katherine Langford, and Kiki Layne is in the new Barry Jenkins movie, wonderful actress, and it was produced by the same producer who did ‘The Mountain,’ which was just in competition at Venice [Film Festival] that I did — Sara Murphy is her name — so I’m looking forward to seeing her. And then finally, Mia Goth, who worked with Lars von Trier in ‘Nymphomaniac,’ which I loved, with my friend Charlotte Gainsbourg. And now she’s in ‘Suspiria,’ I can’t wait. It was also in competition at [Venice Film Festival]. So I’m as you can see, overstimulated already,” he said.

And that wasn’t even everyone there.

Sitting a few spots down from Malek, Ronan and Gyllenhaal were young musicians Khalid and Billie Eilish.

“I never would have thought this would ever come at all, not ever,” Eilish said of attending the show. “Since I was young, fashion has been kind of everything in my way of expression, and this was kind of an unrealistic thing to happen, and it happened.”

“It’s a super big honor for us to be super young and be able to leave from wherever we came from to experience a dream, an experience of a lifetime,” said Khalid, who added that he’s working on “music, music and more music.”

A$AP Rocky was similarly vague about his current projects. “Tons of s–t, as usual. Stuff here, stuff there,” the rapper said. But he’s never too busy to miss checking out a Raf Simons-designed runway collection. “I’m excited to see what Raf has done, the collection, as always,” he said. “That’s why I love coming to Raf and Calvin shows.”

“Just, obviously, here to see one of the best of the best do their thing — that’s that,” said Malek, making his way to his seat. “[Simon] is one of my absolute favorites.”

And as for Dern, yes, Raf and Calvin Klein were a draw, but she was also looking forward to watching her son’s runway debut.

“I worship Raf, and so excited to see Calvin and what [Simons] is up to now. And my son is walking tonight, so it’s a triple whammy, she said. “He really loves design and Raf’s his mentor, so it’s very exciting.”

Selena Gomez to Release New Music Videos ‘In The Next Month’

Miles Richie Looks Ahead at Wilhelmina