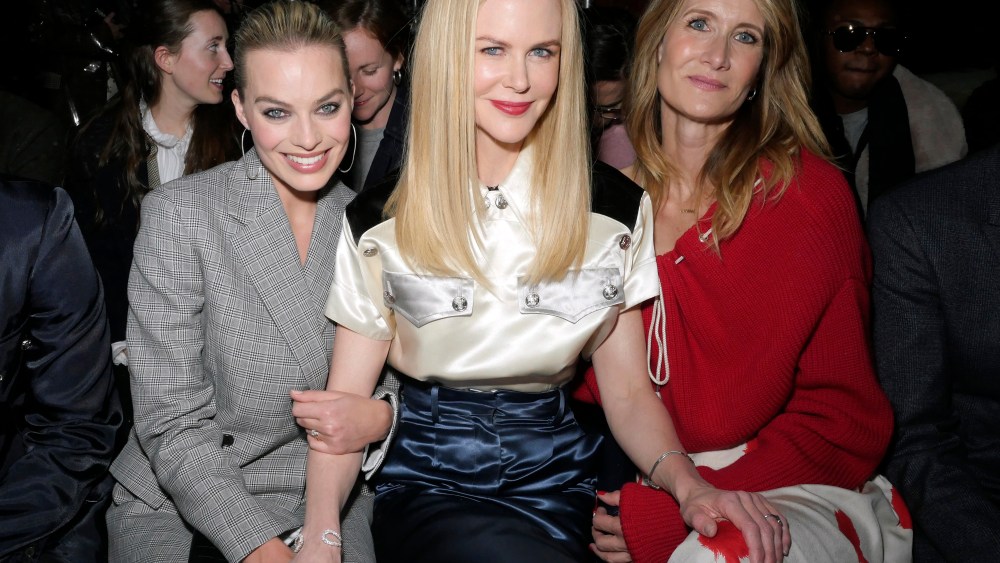 Just as Raf Simons likes to pack his front rows and parties with the who’s who of young, cool talent, the who’s who are more than game to return the love.

“Raf Simons is one of the first designers who I felt like I had access to in a way that was approachable and not polarizing,” said Rowan Blanchard on Tuesday evening from the front row at the designer’s show for Calvin Klein. “There’s something about his take at Calvin Klein that feels for our generation.”

“And also the people that are here tonight: I feel like he has a really interesting group that reflects his vision,” Blanchard added.

Nyong’o, Jordan, Boseman and Wright were doing double duty, with the New York premiere of “Black Panther” earlier in the night. Robbie sat beside fellow Aussie Kidman, who was busy chatting with Dern for most of the show.

“Seeing the classic black and white Kate Moss photos,” Robbie said of her first association with Calvin Klein, moments before the show began. “I just was obsessed from that moment.”

“First time I ever met Raf I’m pretty sure was last summer, right?” Jackson said of her relationship with the designer, turning to her handler to confirm.

“The first time you really got to hang out was at the Met, but I think you did have a minute where you had a little time prior to it,” she was told.

“He was super sweet and super amazing, and made sure that all of us…I don’t want to call us kids, because there’s a mix of ages in the group – but made sure that we were all good,” she said of the Met Gala night. “It was really incredible.“

Jackson has worked with Simons in the video for The xx’s song “I Dare You,” on which he collaborated with Alasdair McLellan.

“The cool thing about Calvin is it’s all inclusive. So there are little things for everyone; different things for different people,” Jackson said. “Everyone has different styles but Calvin has a really cool way where certain articles of clothing can fit into anything. Anyone can wear Calvin.”

Dern said she was mostly there for her 16 year-old son, who is interested in fashion design and modeling.

“Really I’m attending with Ellery who has a great love of Raf and is an invited guest of Raf – they have a beautiful connection,” Dern said.

“He originally asked me to walk,” Harper said. “But my dad had different opinions.”

“He wanted him to wait a little bit more,” Dern said.

Her “Twin Peaks” costar MacLachlan arrived on the early side and was documenting the constructed barn set – and popcorn-covered floor – on video.

“I think there’s a lot of cross-pollination between actors, directors, designers…and so all of us are always looking for inspiration in wherever we can find it,” he said. “I know [Simons] said he takes inspiration from the work of David Lynch, and there’s no reason why we don’t take inspiration from his creativity as well. Designers look at the world in a different way. They look at clothing and shapes and colors in a different way. I do, I find inspiration. I can’t wear a lot of it, but I really appreciate it.”

And did he have popcorn in his shoes already?

“Yes I do! I definitely want to get a picture of that,” he said.

It was inescapable for every attendee, even for heeled sandal-wearing celebs.

“I have so much popcorn in my shoes,” Blanchard said.

“There’s no way there is not popcorn,” Sternberg agreed.