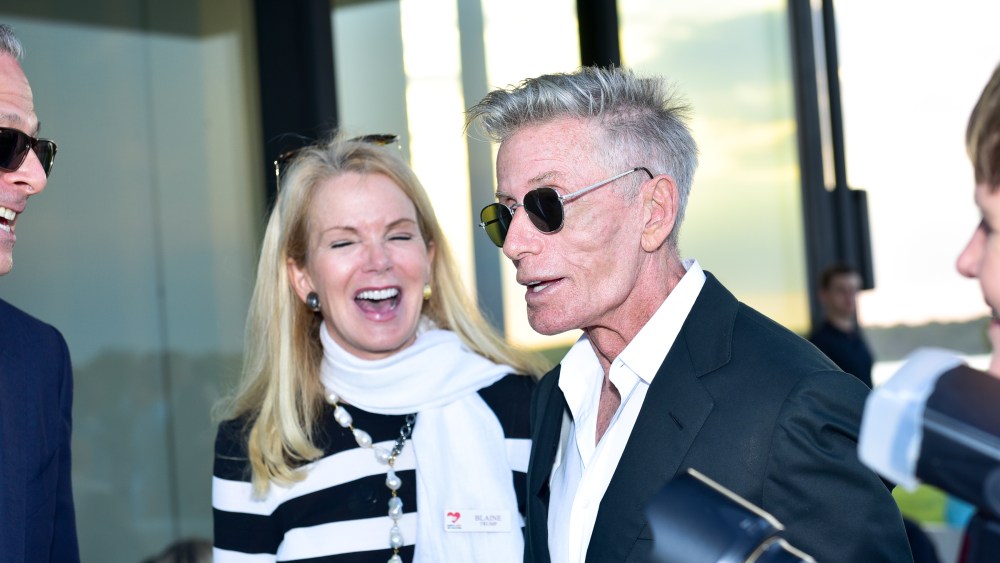 “Today is the first day I’ve been back at this house since last summer and I was thinking— I really like it,” explained Calvin Klein of his sleek modern home in Southampton. On Saturday, the designer welcomed 300 ticketed guests to his exclusive oceanfront property for the annual God’s Love We Deliver Midsummer Night Drinks fund-raiser.

Attendees basked in the setting sun spilling over the angular black structure’s Atlantic Ocean-facing facade while raising money for the organization, which cooks and delivers freshly prepared meals to people in the New York metropolitan area living with severe illness.

The private venue was the brainchild of board member Blaine Trump, a close friend of Klein’s, who convinced him to open his home for the occasion. “This is a group who is very passionate about the cause and, of course, I’ve watched Blaine over the years and she’s done wonderful things for God’s Love. I just wanted to be a part of it.”

Trump, who said she tends to normally avoid the Hamptons, traveled from Miami for the occasion and stayed as an overnight guest at Klein’s estate. “I couldn’t have missed all of this,” she explained. “Calvin is a dear friend and he was so gracious to let us all in.”

In 2009 Klein famously tore down the property’s previous structure, a turreted brick mansion originally built by Henry duPont and nicknamed “the castle” by locals. “When I tore it down, I gave everything to the town of Southampton — all of the glass, the metal, the cement,” said Klein, wearing a black suit and sneakers of his own design. “I heard they paved the roads with it, but I don’t know if that’s true. That was a wonderful thing. I wish they could get more people to do it, but I guess everyone isn’t tearing down houses.”

The picturesque setting was perfect for a social media photo op, but organizers of the event forbade the taking of cell phone pictures once on the property, with security guards thwarting amateur snappers. However, many guests — including TV personality Bethenny Frankel — covertly captured their moment at the luxurious locale.

Standing before an impressive gun-metal infinity pool, guests sipped vodka cocktails and navigated the lengthy raw bar line to indulge in oysters and clams on the half shell.

“This is my favorite job in the world, I love doing this and I hate my day job,” joked board chairman and financier Scott Bruckner in a speech that urged the well-heeled crowd to “reach deep into your pockets“ to help support the organization’s $17 million yearly operating budget. The event in the end raised $500,000.

As the sun became a fiery orb resting atop Shinnecock Bay and the air temperature dropped, Klein quietly retreated into his house and a well-orchestrated valet crew rapidly retrieved a line of waiting luxury autos. “This will make for a good dessert later,” said Basso with a throaty laugh of the charity’s famous  brownies being handed out as a parting gift.