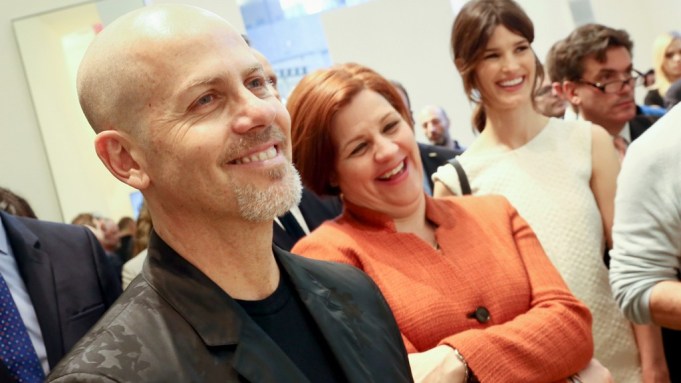 Marriage equality advocates and Calvin Klein devotees tend to overlap. Expectedly, those who breezed into the brand’s Madison Avenue flagship Wednesday night in support of the Human Rights Campaign initiative were ready to delve into the hot topic while in their minimalist wares.

“Last time I was at this event I wasn’t married, and now I am,” City Council Speaker Christine Quinn told the room, inciting a few to chirp “Ow, ow!” She continued, recounting the story of her own recent nuptials to now-wife Kim Catullo. A few in the crowd got visibly teary-eyed. “What all of you have done is create countless moments where families get to be together, where people in good times and in bad get to feel more whole, more part of America and, in some ways, more human,” said Quinn.

“I love her,” Neil Patrick Harris said of the mayoral hopeful as he huddled by the DJ booth with husband David Burtka and Andy Cohen. “A very moving story. And no one even applauded.”

“The cause is so great,” Francisco Costa said later by the store’s entrance. As he spoke, Ellsworth Kelly arrived. “I can’t believe we have Ellsworth, this amazing, beyond iconic person, here supporting tonight,” the designer said, gesturing toward the artist. “I get chills just knowing that he’s here.”

“It’s obviously an issue very near and dear to me. I’m getting married myself this year,” Jesse Tyler Ferguson said. “We live in California and can’t get married there so we’re getting married here in New York. It’s not right in principle and on top of that, I can’t use vendors in my state because it doesn’t recognize me as equal. It’s too bad for California because weddings cost a sh-tload of money.”