There were global superlatives all around as the company threw the largest bash of the year for the brand in the most wired city in the world. 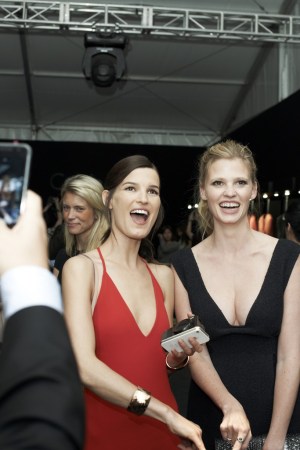 SEOUL — There were global superlatives all around as Calvin Klein threw the largest bash of the year for the brand in the most wired city in the world on Thursday night.

In addition to showcasing the fall offerings from the company’s various lines via live model installations, the brand commissioned a one-night-only exhibition of video art curated by the New Museum in New York and inspired by Korean video artist luminary Nam June Paik.

Actresses Kate Bosworth and Chloë Grace Moretz and an army of models, including Lara Stone and Matthew Terry, flew in for the event. They were joined by Korean celebrities such as Lee Hyori and K-Pop idols who arrived on the scene with their own gaggle of swooning fans.

“This is a huge initiative and Korea is a very important market for us,” said Tom Murry, president and chief executive officer of Calvin Klein Inc., on why the decision was made to host the party in Seoul. The brand will be opening a 4,000-square-foot flagship this fall in Cheongdam-dong, one of the city’s most expensive areas.

“Twenty percent of our entire global sales are in Asia, and Korea has shown 20 percent growth last year with $300 million in sales,” said Murry.

The fashion and art fete took place on the roof of Seoul Station, an iconic city landmark at the center of the city, and was lit up by the video art of nine different artists that flickered across the world’s largest LED screen that hung from the building across the street from the station.

While guests mingled on the terrace and watched the brilliant images that included “the world’s biggest kiss,” others wandered through halls featuring model installations of the brand’s fall lines interspersed with works by digital artists Rafaël Rozendaal (a floor of shattered mirrors and floors with swirling graphics), Flightphase (motion-detecting and reflecting images on the wall) and Scott Snibbe (swirling comets of dots manipulated by a touch screen).

The Calvin Klein underwear installation had more than a dozen male and female models flexing and pouting throughout the night on an elevated white stage. Terry, the face and body of the Calvin Klein Underwear and Calvin Klein Jeans campaigns for spring, proved to be the biggest hit of the evening as he worked his angles in the iconic briefs in front of gawking, squealing guests.

On the far side of the structure, DJ Stretch commanded an entire hall to himself and turned the party into a club, while the dramatically dark main hall featured the leather-detailed sweatshirts and silver-belted stark stresses of the fall Calvin Klein Collection.

“We made use of great technical fabric and innovative fiber, with an emphasis on the waist,” said Francisco Costa, of the women’s line. “It’s a mix of luxury and innovative technology that allowed us to achieve cuts and patterns that weren’t possible before.”

“Francisco has made it so young and minimalist and special,” said Moretz.

Of the men’s line, Italo Zucchelli said that his fall collection was inspired by New York City. “We wanted to create a sleek, modern and urban collection and we incorporated alligator leather and camel leather.”

“This is the first time I’m seeing it in person — I’ve only seen it online,” said Bosworth, who has long had a special relationship with the fashion house. “There’s something really modern and courageous about their minimalist approach that I really appreciate.”