The iconic designer dished out advice to fellow designers in the room, including Tory Burch, Olivier Theyskens, Thakoon Panichgul, Alexander Wang and more. 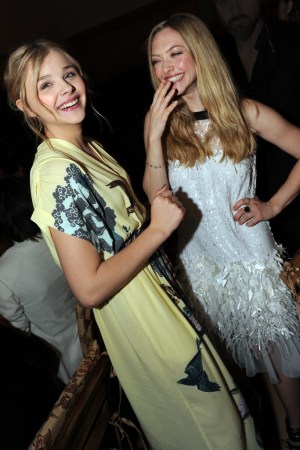 She wasn’t alone in her excitement about the fashion legend and keynote speaker. “I have never had a chance to meet him,” said Billy Reid, last year’s winner. “It would be just an honor to see him.”

Klein, for his part, didn’t disappoint, dishing out some advice to the designers in the room, who included Tory Burch, Olivier Theyskens, Alexander Wang, Behnaz Sarafpour, Jack McCollough and Lazaro Hernandez, Prabal Gurung and the night’s winner, Joseph Altuzarra, and runners-up Pamela Love and Creatures of the Wind’s Shane Gabier and Chris Peters. Klein talked about his early days and how he built his business with Barry Schwartz; his first $50,000 order from Bonwit Teller; growing his name into a lifestyle brand, and having plenty of excitement — sometimes of the fear-inducing kind, like a run-in with the notorious Gambino family. “I dealt with truckmen, unions, and gangsters,” Klein recalled. “One day, I got a call from the Gambinos telling me that they are now my truckmen. I said, ‘What do you mean, truckmen?’ I was just barely in business. At that point, I began to realize how important it was to not think that I know everything.”

Klein turned to one of his first employers, who was a manufacturer, for advice. “He said, ‘Don’t worry I will take care of it,’” Klein said. “I told him they wanted 25 cents to deliver a box and he said, ‘25 cents is OK.’”

This was one of several highlights in Klein’s lengthy but animated speech, which clearly delighted the crowd, including Joe Jonas, Chloë Moretz, Amanda Seyfried, Hannah Bronfman, Carmelo and Lala Anthony, Zoë Kravitz and Mia Wasikowska.

Vogue’s Anna Wintour, meanwhile, revealed the CFDA/Vogue Fashion Fund China Exchange, which will be underwritten by Silas Chou. It aims to help American designers better understand the Chinese market and vice versa, and will kick off next year with a team from Proenza Schouler visiting China, and Chinese designer Uma Wang coming to New York.

As for the night’s winner and two runners-up, they naturally couldn’t contain their excitement. Within seconds of winning, Gabier and Peters were on the phone to inform their mothers, and Altuzarra, who had already been nominated last year, was basking in the spotlight. “It’s pure happiness,” he said. “It was worth the wait.”