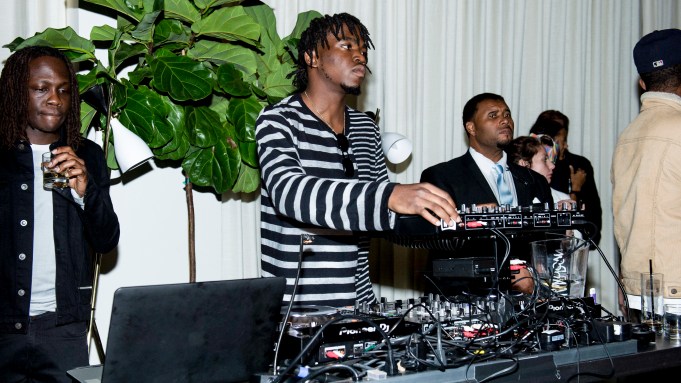 New York Fashion Week has come to a close, leaving one thing left to do: celebrate. Matte and Spring Place allowed guests to do just that on Thursday night in TriBeCa. The event offered attendees a chance to ditch form-fitting clothes in favor of jersey and jeans to get down to the beats of May Kwok, Le1f, Kirk Knight and Cam’ron.

“I missed all of my friends’ shows,” rapper and producer Le1f said of his fashion week experience. “I walked for Threeasfour and I made it to that one.” He said he had hoped to show support for Telfar, Eckhaus Latta and Hood by Air, but got caught up in other engagements. “I had a show in Canada last week. And then I overslept for one. Things happen.” Now that the festivities are over, Le1f plans to kick back and relax. “I have, like, two weeks off, so I’m just gonna go smoke a s–t ton of weed. Like, so much weed.”

Shortly after midnight, Cam’ron strolled into the building. The rapper had the crowd’s full attention as he took over the microphone to perform a four-song set, including “Hey Ma.” He, too, had missed fashion week in favor of prior engagements.

“Fashion week’s all year for me,” Cam’ron said. “It’s always fashion week.” He hadn’t been to any shows due to travel — “I just got back from Texas and the West Coast” — and has been working on a few projects. His second sneaker collaboration with Reebok is due out this November; his first collaboration with the brand celebrated his 2004 album “Purple Haze.” Cam’ron says an upcoming collection with Stance Socks will come out in November, and he’s working on music. “My new project, ‘Killa Season 2,’ is [due out in] December or January. Either one, but that’s what I’m working on.”

As he said, it’s fashion week all year.