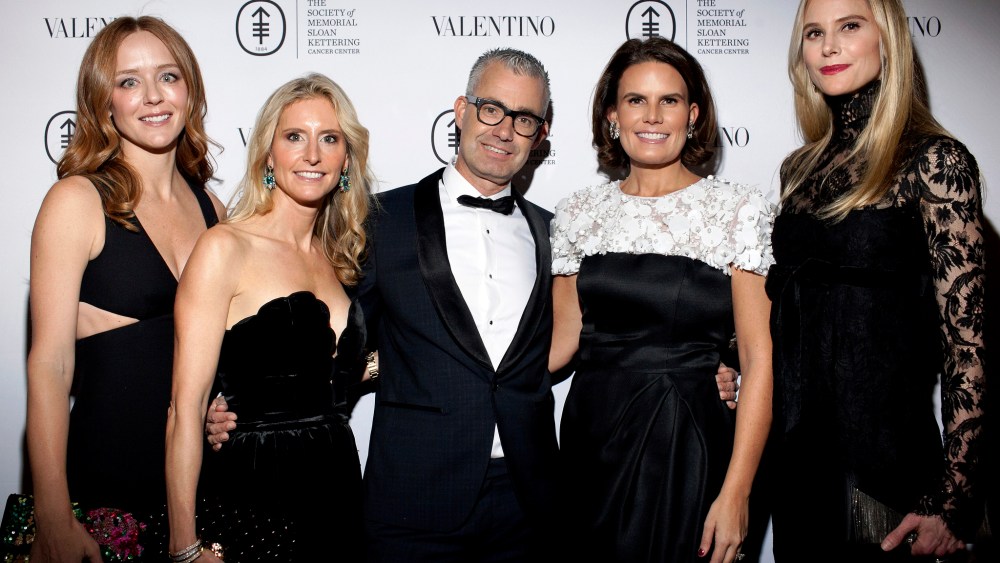 The Society of Memorial Sloan Kettering Cancer Center in New York held its annual fall party with Valentino on Wednesday night at the Metropolitan Club on 60th Street and Fifth Avenue. Young and old alike, the guests of this event transformed into peacocks — they were out and fanning their feathers. Glittering Empire waist dresses, drop diamond and emerald necklaces, sequins and velvet — you name it, it was sparkling at the Metropolitan Club, which itself is a pretty shiny place. The walls and floors in the entrance area where the cocktail hour was held were white marble, while the coffered ceiling gleamed golden. Inside the dining room: red velvet drapes and a sky scene painted overhead that vaguely resembled parts of the Sistine Chapel. In essence, this was New York high society at its absolute zenith.

Chairman of the associates committee Gillian Hearst, Indre Rockefeller, Mia Moretti, Dani Stahl and Shiona Turini all turned out in support. Members of the society including Clé de Peau ambassador Annelise Peterson Winter, Amanda Waldron, Jamee Gregory and Virginia Tomenson also attended. Most of those in attendance said they had been personally affected in some way by cancer, whether it was a family member, a friend or themselves. Tomenson spoke of when she was diagnosed with stage three breast cancer and the intense treatment that followed.

“[During The Society’s] first meeting, I went around to all the associates and asked what makes them want to be a part of the committee,” Tomenson said. “The shocking reality is a lot of people have had cancer touch their lives in one way or another. That’s why I participate in patient-to-patient volunteering, to help talk current patients through what they’re experiencing.”

Gregory said that with about 22 committees and eight events annually, working with the society is “a real job” for her. She added that each year, the associates choose one area of focus on which to zero in their efforts.

“Last year, my first year, we focused on precision prevention — finding cancer before it even begins from a drop of blood or saliva,” she said. “And this year, we’re focusing on patient care.”

During dinner, which included an auction and petit filet, the conversation at one table veered away from the cause. Some attendees noted there were lots of women who came to the party stag, and that 15 or 20 years ago, this would never have been the case.

“Times have changed,” another added.