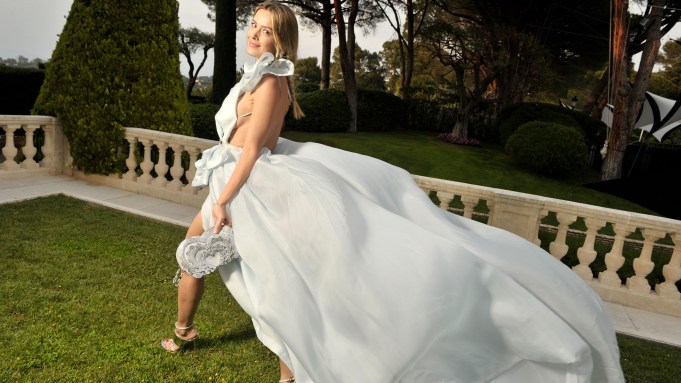 CAP D’ANTIBES, France — Flowing down the gardens of the Hotel du Cap-Eden-Roc for the 24th edition of amfAR’s annual Cinema Against AIDS gala on Thursday, the night’s glittering procession of guests including Jessica Chastain, Hailee Baldwin, Bella Hadid, David Beckham, Nicole Kidman, A$AP Rocky, amfAR chairman Kenneth Cole, Eva Longoria and Dustin Hoffman, all of whom had stuck to the event’s “The Golden Age of Hollywood” theme.

“It’s very heavy, kind of breaking me,” said Bella Hadid ruefully as she glided by in her beaded Ralph & Russo gown.

“A dinner? I wasn’t invited,” joked Will Smith as he arrived with Jessica Chastain, who ticked off Greta Garbo, Greer Garson and Katharine Hepburn as her icons.

Nicole Kidman was hoping to raise record money Thursday night, as “we still need a cure for AIDS,” she said, dazzling in her Chanel haute couture finery.

Rita Ora, wearing a pink Chanel number, was looking forward to performing her new single “Your Song” for the amfAR crowd, ahead of its release at midnight.

The prestigious event capped off a whirlwind week of events on the Cannes party circuit as the film festival marked its 70th year.

Kicking off the festivities on Wednesday night was designer Philipp Plein, who staged his inaugural resort show in the gardens of his summer villa, La Jungle du Roi (“The Jungle of the King,” in English), with “hot felon” Jeremy Meeks and Paris Hilton walking in the show. A pink carpet served as the catwalk, among the featured fountains stacked with Philipp Plein-branded bubbly.

Partying it up at the Martinez Beach, meanwhile, for the L’Oréal Paris Cinema Club, Balmain’s Olivier Rousteing — flanked by a bevy of models including Lara Stone, Doutzen Kroes and Irina Shayk — was still buzzing from attending the premiere of Sofia Coppola’s “The Beguiled” an hour earlier.

On walking the red carpet, he said: “It’s pretty overwhelming with all the crowds and all the different universes coming together, with this mix of fashion and film, intellectual and popular culture, it’s incredible.” The designer was also celebrating the soon-to-be-launched limited-edition capsule collection of lipstick he designed for L’Oréal Paris.

An emotional Hoffman — who with the cast of his latest flick, “The Meyerowitz Stories” received a standing ovation at the film’s premiere on Sunday — said it had been his “favorite memory from Cannes.”

Lagerfeld, meanwhile, confessed he has “never been to the Cannes Film Festival in my life,” saying: “For me it’s Monte Carlo or Saint-Tropez, and nothing in between.”

Partying late into the night, Will Smith, Julia Restoin-Roitfeld and Donatella Versace were among the chosen few who got to attend Persol’s centennial anniversary party, held in partnership with amfAR, aboard a boat moored in Cannes’ Port Canto. The night’s entertainment included a live performance by Dionne Warwick, a longtime supporter of the charity, with the crowd singing along to her iconic Eighties hit “That’s What Friends Are For.”