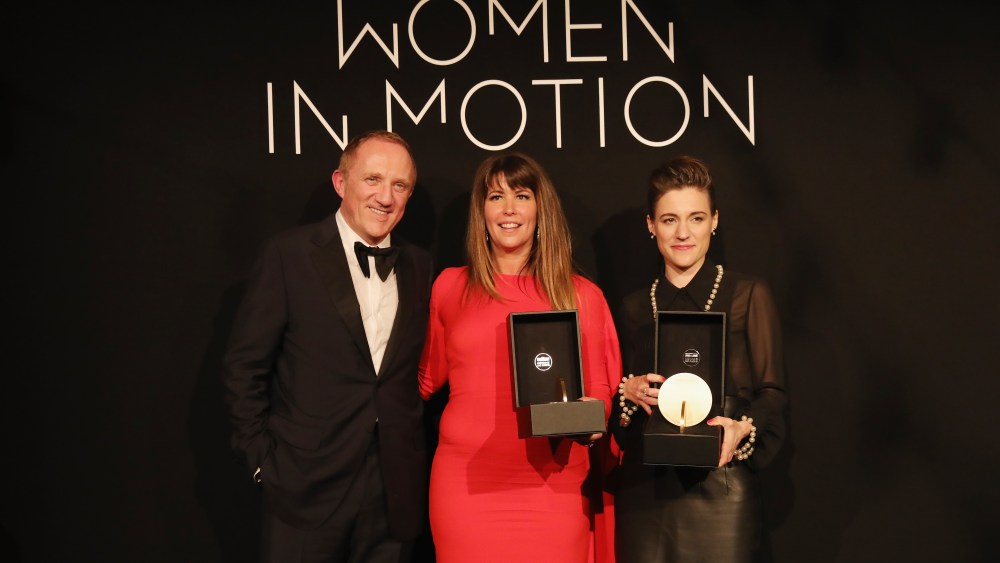 “The hotline, I don’t know about any hotline,” said Benicio Del Toro at the Sunday night presidency dinner of the Cannes Film Festival, which was dedicated to Kering’s 2018 Women in Motion awards ceremony.

The actor had been asked what he thought about the Cannes Film Festival organizers setting up a hotline for victims of sexual, physical or emotional harassment, in partnership with the French Ministry of Gender Equality. The Kering dinner came the night after the women’s march that took place on the red carpet Saturday, which proved a main point of conversation throughout the festival.

While Del Toro was in the dark, other guests at the dinner, held at the Musée de la Castre primitive art museum, were more up to speed.

For “Wonder Woman” director Patty Jenkins — the recipient of the Women in Motion award presented on the night — “One of the most incredible things about it was, there were so many women there who I admire and look up to, and to all be together, uniting to bring light to something.…It’s also about letting women tell their universal stories.” When asked when filming will start for the “Wonder Woman” sequel, the director replied: “Very soon — shockingly soon.”

“It was very moving, very meaningful for us to experience that in Cannes where we started the Women in Motion talks and to see such an homage to the few women who have participated in [the festival across its history],” said Salma Hayek.

“And even ‘Bandidas’ — Penélope [Cruz] and I went to Luc Besson because he was always making films about strong women,” added Hayek who talked about the dearth of female writers and directors. “The few that are working that have the experience are all taken. Some friends of mine who had been struggling for a long time, they’re working nonstop. But it’s going to take time to build the experience with some of the new voices.”

Mingling with movie moguls were guests including Catherine Deneuve, Mads Mikkelsen, Golshifteh Farahani and Charlotte Casiraghi who on Wednesday will celebrate the launch of a jewelry capsule with Montblanc.

Joined by the film festival’s president and general delegate, respectively, Pierre Lescure and Thierry Frémaux, Kering chief executive officer François-Henri Pinault in his speech celebrated, “A revolution in the movie industry.” He paid tribute to “the bold women who dared break the silence.”

“Thanks to them, the world is no longer the same today. The awareness of the need to give women the respect they deserve has never been so important,” he said.

When the Kering Foundation was founded 10 years to campaign against violence against women, “the topic was still taboo,” Pinault said. “These recent events show that we were taking the right path; the path of respect, of justice, the path of gender equality.”

Kristen Stewart arrived with some of her fellow jury members and their president, Cate Blanchett. The actress sounded hopeful about the industry’s progress.

“I’ve been wanting to make films of my own since I was nine years old and I’ve never felt discouraged by my gender. I’ve been lucky enough to work with people that have always bolstered my identity and not everyone can say that. I was, like, 10 years old working with Jodie Foster; I was a tiny kid and that was such a unique experience,” Stewart said. “So to hear the statistics spoken out loud from the mouth of someone like Cate [Blanchett], and then to look down and see everyone together [at the march], honestly I felt so lucky to exist, and also baffled by my place in that. I’m a lucky girl, and to be honest we all are.”