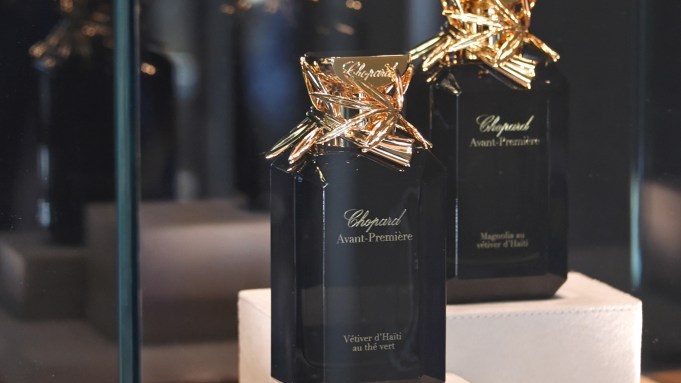 Chopard is to reenter the fragrance market with the launch of a range of scents containing sustainable ingredients. At a lunch on Tuesday in Cannes, France, cohosted by Chopard copresident and artistic director Caroline Scheufele and Livia Firth, founder of sustainability consulting firm Eco-Age, the Swiss jeweler revealed it will introduce four unisex perfumes.

Dubbed Néroli, Vétiver, Magnolia and Vanille, each of the scents was each based around a fair trade ingredient and were developed in collaboration with Firmenich and its noses Alberto Morillas and Nathalie Lorson.

A special edition of the Vétiver and Magnolia perfumes, dubbed “Avant-Première” and featuring a golden palm curling around the cap of the bottles, was presented at the event. The perfumes will enter Russian luxury department store Tsum on May 29 before rolling out worldwide through select retailers.

Chopard, which this year is celebrating 20 years of partnership with the Cannes Film Festival and five years of collaborating with Eco-Age, also revealed it has injected more fair trade sparkle into Cannes’ iconic Palme d’Or trophy with the addition of fair trade diamonds for the 2017 edition. The trophy has been crafted from Fairmined ethical gold since 2014.

Firth at the event saluted the progress made by Chopard. “There is a level of fear, a perception that sustainability diminishes a brand instead of adding value. But sustainability is like an elephant, you have to cut it into small pieces to eat it, one bit at a time,” she said.

“Consumers understand the stories behind [the things they wear] and want to hear them. Companies are starting to understand that that is what customers want, but also that it makes financial sense,” added Firth, who already has her eyes on her next project: the Green Carpet Fashion Awards, which will hold its first edition at Milan’s La Scala opera house in the fall. Italian fashion brands including Alberta Ferretti, Gucci and Valentino are slated to participate.

To mark this year’s anniversaries, Chopard presented its GCC Award for Commitment to Sustainability and Social Justice to four of its partners: mining companies Lucara from Botswana, Gemfields from Zambia and Aurora Gems Pty Ltd. from Australia, as well as the Alliance for Responsible Mining in Colombia.

“Chopard has operated a small revolution in ethical sourcing in the gemstones field, but the basis of the market remains the same,” said Yves Bertran Alvarez, executive director of the Alliance for Responsible Mining. “Now the interest in ethical sourcing is high because the public wants that. The demand is bottom up.”