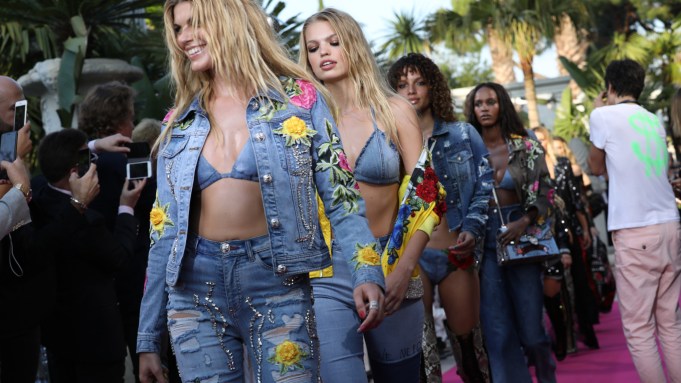 CANNES, France — With the film festival entering its home stretch, Philipp Plein swiveled the spotlight onto his maximalist villa, La Jungle du Roi (the King’s Jungle), in the Cannes hills on Wednesday night for his inaugural coed resort show.

The designer rolled out a pink carpet in the garden of his mansion, filled the fountains with bottles of Philipp Plein-branded bubbly and offered guests silver-topped pots of candy. Works by the American artist Alec Monopoly, who collaborated on the show, dotted the garden and house.

“This is the breakfast room,” said Plein walking through the hair and makeup area where his diverse group models, including Paris Hilton, Jeremy Meeks, Sofia Richie and Winnie Harlow, were being prepped.

“Guys, be careful with the vases; they fall down and you’re dead,” he said to a cast of helpers during the run-up to the show.

It was then the German designer confessed that he was having regrets about hosting the event in his private villa. “You don’t enjoy a party you’re hosting because a good host cares about the needs of his guests first,” he said, adding “there’s something very private about letting people into your home.” He said it left him feeling exposed.

For friends and guests, however, it was a chance to peer into the designer’s jungle-themed interiors, which included a wall covered in trophy animal heads done in white ceramic. Richie, who flew to Cannes to walk in Plein’s show, said it matched her mental image of his home. She added that she was also admiring the marble in his kitchen.

“I am completely a Plein girl,” said Hilton, who walked the show in a long black dress with lace detailing and a sultry thigh split. Taking a breather between the preparation of her long-announced second album, several product launches and a DJ gig in Ibiza, she was enjoying Cannes with her boyfriend Chris Zylka.

Jeremy “Hot Felon” Meeks, a former convict whose mugshot made him a viral sensation in 2014, revealed he was currently taking acting classes in Los Angeles, and was in Cannes to network ahead of undisclosed film projects. This was his second time on a runway, having previously opened Plein’s fall show in New York.

“I’m going back to my roots,” said Plein of the collection, which revisited key themes such as the dazzling Army jackets that launched his brand. The collection ran the gamut from luxurious sportswear to glamorous gowns. Key pieces included bomber jackets and a white croc and denim jacket, all of them bearing flamboyant embellishments.

Eva Longoria was among the guests who watched the poolside show from transparent chairs — and the odd sun lounger.

The highlight of this smorgasbord of studs, embroideries and florals was the collaboration with Monopoly, who graffitied Harlow’s ensemble live during the show. Already busy preparing for Miami Art Basel, the artist said the collaboration with Plein came naturally as “customers who are buying my art wear his clothes — so it was a perfect synergy.”

The party was already winding down before sunset. Despite his proclivity for buzzy, extravagant shows in Milan and New York, Plein wanted a relatively small production for Cannes.

“When I sent my assistants around with bottles of Champagne ahead of the show, my neighbors confirmed that I don’t usually make noise or have parties. But let’s see what happens,” said Plein, who ended the show by leaping into the pool.