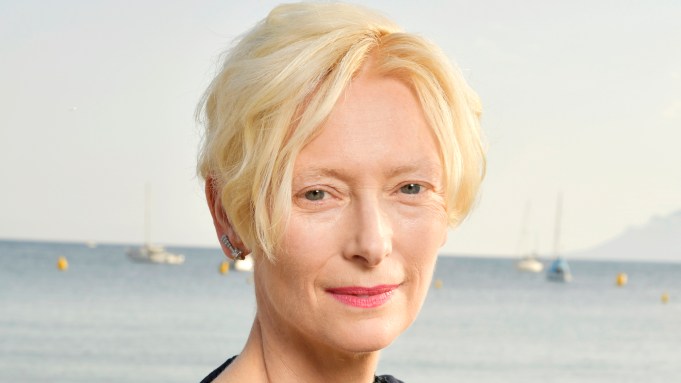 CANNES — Kristen Stewart made waves when she arrived at the Chanel dinner just ahead of her “Crimes of the Future” premiere. The brand hosted its annual dinner on the Bijou beach, Cannes’ hidden gem with calm, crystal waters away from the Croisette crowds. Other red carpet royalty was on hand, with Tilda Swinton, Rebecca Hall, Julie Gayet, juror Edgar Ramírez, director Ruben Östlund, as well as some real life royalty with Princess Charlotte Casiraghi joining the fete to take in the sunset.

Swinton, unconventional as always, had opted for a white shirtdress from Haider Ackermann for the premiere of her sweeping romance “Three Thousand Years of Longing” earlier in the week, and sported a deep blue Chanel gown for the beach bash. Still she let loose while chatting with director Lynne Ramsay and removed her shoes to frolic in the sand.

The actress reflected on the deluge of major films coming to big screens. “We’ve just come out of a frenzy, most filmmakers would agree, there was an urgency of making films that we might have wanted to develop for another year or so, but there was a real spurt of energy in the last year when people just made so many films,” she said, adding a bit of British slang: “We’ve all just been caning it.”

As for creating her big film festival looks, it’s all part of her never-ending good time. “It’s just dress up and play at the end of the day,” she said, reflecting on creating her unconventional red carpet looks. “Pretty much everything is magic.”

For Casiraghi, who has had a lifelong relationship with designer Virginie Viard, coming to Cannes fulfills a bit of a teenage dream. “I remember as a teenager watching on French television — at the time, CanalPlus had a big show on the Croisette — and I remember feeling that so much was happening in Cannes. I really wanted to come but my mother was not really wanting to bring us to anything that was too exposed,” she said of Princess Caroline’s protective instincts.

She walked the red carpet for Marion Cotillard’s “Brother and Sister” premiere, just trying to enjoy the moment. “Image is something that I try to not give too much influence,” she said. For the evening she opted for a silk pajama-style skirt set, adding: “It’s so comfortable I could go to sleep in it.”

Director Lukas Dhont has been sporting Gucci this festival, decrying the lack of Chanel menswear. “But I am doing Chanel beauty the day of our premiere,” he said. The Camera d’Or winner’s second film, “Close,” bows Thursday. The theme is friendship. “Then you arrive at the festival and realize there’s at least five other filmmakers that have films about friendship, and you realize that in that moment in time when you were so isolated that a lot of us were interconnected with an idea that transcends culture and background.”

For “Black Panther” star Letitia Wright, the Chanel connection is a “long-term romance.” The actress is in town for the premiere of her film “The Silent Twins,” which she stars in and also produced. “It is tough because you are wearing two hats at the same time,” she said. “But we had so much support and it was a great collaborative experience.” Even as acting remains her “first love,” she has new projects coming from her Threesixteen Productions banner.

Model and DJ Soo Joo Park is adding more hyphens to her title. She just wrapped shooting on Vito Schnabel’s “The Trainer” in mid-May, and is working on new music that will drop this fall. After performing at the Chanel Métiers d’Art show back in December, she decided to go all in on a full-length album under the name Ether. “I think that was the real catalyst when I was like, ‘OK, I’m ready,’” she said of bringing the sound she calls “ethereal, electronic, avant-garde and pop” to the masses. “It’s a new age of people experimenting,” she said. “Don’t box yourself in.”