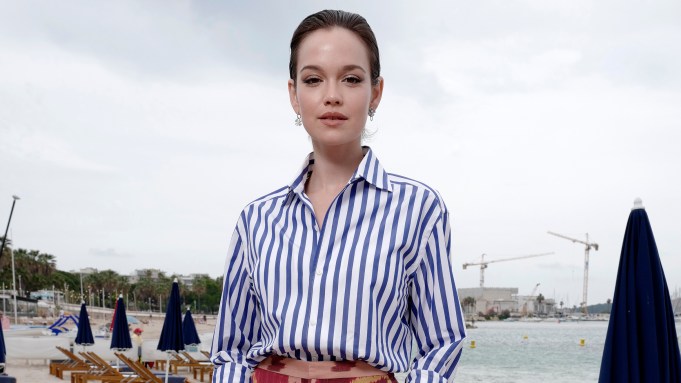 CANNES — Ralph Lauren may be “all-American,” but his striped shirts and nautical vibe fit in nicely in the South of France.

At the brand’s beachside luncheon, “Marie Antoinette” star Emilia Schüle sported a bold-blue striped button down. She’s one of the rare celebrities who is in town to actually see movies. “I got an accreditation, I got a badge and everything,” she said. She’d been popping into theaters for a film or two a day before she received the invite from Ralph Lauren. “This wasn’t planned, so this is a very special afternoon for me.”

After spending seven months filming the upcoming BBC and CanalPlus drama, the Berlin-based actress calls France her second home. She’s certainly happy to be out of the corsets of the costume department and on the beach in loose pants and sandals. “It was very painful at the beginning. It’s a form of suppressing women, you know, literally put them in a cage and make them dependent on other people to dress them,” she said of corsets. “I’m so happy that my boobs are mine again.”

“Peaky Blinders” actor Matthew Postlethwaite had an air of Great Gatsby in his cream-colored linen trousers, striped blazer and espadrilles. He’s in town working on developing his short film “The Great Artist,” which won a slew of awards at film festivals around the globe, into a feature. The film also has that Old Hollywood vibe.

“I like things that are classy, a little old school, sophisticated and elegant — even if that’s maybe not myself,” he joked. A decade on “Peaky Blinders” with a wardrobe full of tailored suits and bowler hats influenced his aesthetic, he said.

Coco Rocha had a bit more of a disco vibe in a purple jumpsuit that she picked out just an hour before lunch. She’s looking forward to wearing vintage John Galliano later this week. The model is trying to incorporate more vintage into her wardrobe, but pulled no punches in what that means in terms of the fashion business.

“We’re in an industry where we’re telling people to buy and throw out. So it is complicated to say we’re all trying to be so conscious of [the environment] when we’re telling people, ‘You need to get this new pair of pants.’ So it frustrates me when we’re saying we’re doing our best, but really in reality COVID-19 taught us we don’t need new clothes,” she said of the consumption slowdown over the last two years.

Re-wearing old pieces is not only about sustainability but the cultural conversation as well, she said, citing Kim Kardashian’s Marilyn Monroe dress at the Met Gala. “It’s just like a blast from the past and we always remember what that dress represented at that time. So it’s a conversation with vintage. That’s what it’s all about.”

French actress-director Melanie Laurent is prepping her next project, a feminist action film for Netflix. She wouldn’t reveal the name as “it’s going to change anyway,” she said, but added that it’s a reframe for female characters.

“It’s showing the realism that you never see in those movies,” she said. “It feels like we just replaced men to put women in the same types of films. And we don’t look at the fact that women are just different and, you know, they’re not going to do action like men. So that’s the singularity that I love.”

Guests including Poppy Delevingne, Sara Sampaio and Nidhi Sunil sat down at a long table filled with orchids recalling the ikat prints from the Ralph Lauren spring 2022 collection, for one of those “only in the South of France” three-hour lunches, though Sampaio made an early dash to hit the “Decision to Leave” premiere in time.