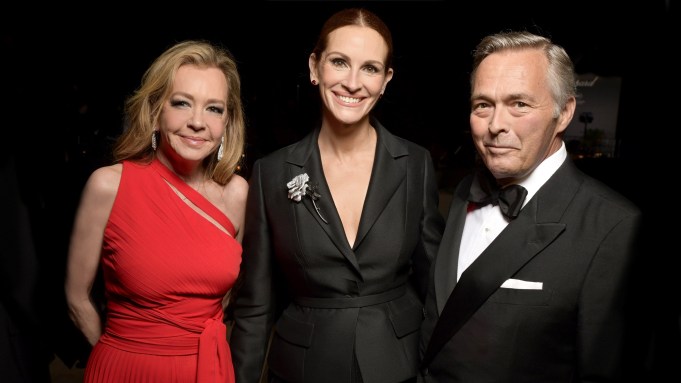 CANNES — Even superstars get camera shy. Julia Roberts was feeling it when she took to the stage at the Chopard Trophee gala to honor Sheila Atim and Jack Lowden.

“When Caroline said there would be a little dinner after, this wasn’t what I pictured, so I feel a little sick,” she joked as all eyes — and screens — were on her. “This isn’t like we do dinner at home, but it’s beautiful to be here.”

Then, with her megawatt smile and easy charm, the actress chided audience members to put down their phones. She was serious about her request, calling out individuals one by one, until every device was face down. It was a breath of fresh air.

“So here we are in this amazing moment together. We are energetically connected to each other. This is a moment we are all gonna share forever,” she said of wanting to make eye contact with the audience, seated seaside at the Carlton beach. “It is so meaningful to me.”

Roberts thanked festival artistic director Thierry Frémaux and president Pierre Lescure, and Chopard co-president Caroline Scheufele. “One of the things she said today was this is not about Chopard, this is about cinema, which is the love of my life after my husband,” she said. Roberts had changed out of the custom Louis Vuitton pantsuit she wore on the red carpet into a Dior haute couture Bar jacket and full tulle skirt from Maria Grazia Chiuri.

“I love actors and it is such a hard job, and these are two incredible humans that do that magic trick that makes the incredibly hard things look easy, then people think acting is easy. That is our job and these two do it magnificently,” Roberts added, welcoming Atim and Lowden onstage.

She called Atim her “rosé loving sister,” and praised Lowden’s performance in “Fighting With My Family.”

“I just know that it is just one of the many cherries that will be on your lifelong artistic cakes. And I am your godmother now but it doesn’t mean you can call me,” she joked, adding: “You don’t need anything else from me because you have your wings.’”

It was the first time in Cannes for the “Doctor Strange and the Multiverse of Madness” star Atim. “I think it’s really wonderful to have people like Julia say such encouraging things,” said a jubilant Atim, who said she was quietly “losing it” onstage. “I know there are families at the core of Cannes and the core of Chopard, and I would like to feel I am emerging into a family,” she said, adding: “I will call you.”

“I never thought I’d get a new godmother at 31 years old and it would be Julia Roberts; it’s still a little surreal,” said Lowden.

Scheufele reminisced about the company’s 25-year relationship with the Cannes Film Festival, after being asked to reimagine the Palme d’Or all those years ago. “It’s a long story — it’s a love story,” she said.

Roberts sat flanked by Scheufele and Frémaux, along with the jury, which included Rebecca Hall and Noomi Rapace.

Rapace stunned in fuchsia Lanvin, picked out with stylist Rose Ford. The pair have been doing fittings for weeks in anticipation of the event in order to avoid any unexpected wardrobe needs during her jury duty. “It’s coming down to very carefully picked looks. You need to be very specific and also be careful with your energy because it’s a huge responsibility to be here,” she said of watching 21 films in 12 days. “I know how hard it is to make a film so I really want to give my attention and concentration and I totally feel like they deserve the best version of me, so I need to be very specific” with wardrobe choices. No last-minute-packing panic here.

Edgar Ramírez played around with “Cold War” actress Joanna Kulig. “I get to be with her,” he said, pointing to his Un Certain Regard jury mate when asked what he is enjoying about Cannes. “She’s one of my favorite actresses. It’s been a beautiful experience. It’s just beginning and the chemistry’s incredible,” he said. They’ll reveal their selection next week.

Atim posed with Lashana Lynch as the two helped each other adjust their long trains. Lynch, in a shiny Dolce & Gabbana column, called out to Rebecca Hall and said she has been “serving the looks” for her appearances. “Literally this is like the third one today,” she said of Hall’s sleek pantsuit and emerald necklace.

Hall shrugged off her casual glamour, which has ranged from Burberry to Gucci so far: “I dunno, what are you gonna do?”