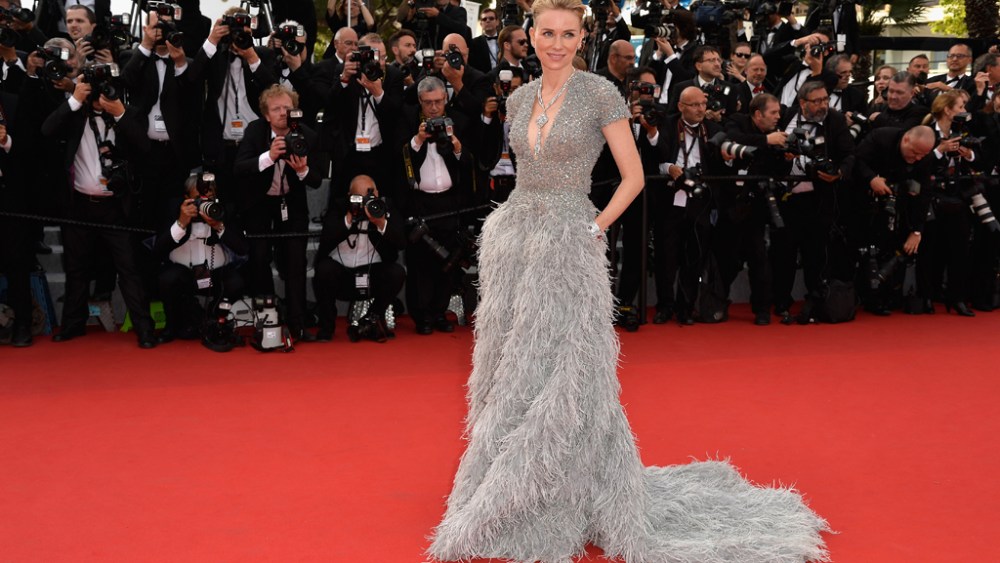 CANNES, France – “Cannes is a woman.”

With those words, French actor and master of ceremonies Lambert Wilson signaled that the opening ceremony of the Cannes Film Festival on Wednesday was ladies’ night.

It was intended as a tribute to female talent in a year when the fairer sex is front and center at the French Riviera event — as symbolized by Ingrid Bergman, whose face graces the poster for this year’s edition. For only the second time in history, the movie that launched the film fest was directed by a woman.

Emmanuelle Bercot’s “Standing Tall,” a French drama about a teenage delinquent, stars Catherine Deneuve as a children’s judge. On Wednesday night, the 71-year-old movie legend played the masculine-feminine card to the hilt with a daring Jean Paul Gaultier couture outfit that was half pink ballgown, half black pantsuit.

Flashing a bronzed section of midriff in her slinky silver Atelier Versace dress, Karlie Kloss was all for celebrating sisterhood.

“I grew up in a house of all ladies: my mother, three sisters and my poor father. He’s the only male influence in the house. Even all the pets we had as kids were all girls, so I’m a big fan of ladies’ night, and I’m also here with all ladies,” she explained, nodding to fellow L’Oréal Paris brand ambassadors.

Making her first Cannes outing as a rep for the cosmetics giant, Naomi Watts wowed in a feathered and backless light gray Elie Saab gown and a necklace from Bulgari’s upcoming Giardini Italiani high jewelry collection.

Among the other guests was Lupita Nyong’o, who playfully swished the skirt of her grasshopper green pleated Gucci gown for photographers, while Isabella Rossellini — Bergman’s daughter and head of the jury for the parallel section Un Certain Regard — wore an organic silk cape dress by Stella McCartney for the Green Carpet Challenge.

Natalie Portman came with her husband Benjamin Millepied, who choreographed a dance tribute to Alfred Hitchcock’s “Vertigo” for the opening ceremony. Portman, wearing a lipstick-red column dress, will present her directorial debut “A Tale of Love and Darkness” out of competition.

Jury copresidents Joel and Ethan Cohen were greeted by a standing ovation, while Julianne Moore — in plunge-necked Armani Privé — turned up to collect the award for Best Actress which she won in absentia last year for “Maps to the Stars,” before declaring the festival officially open.

Cannes organizers, who have come under fire in the past for failing to showcase female directors, appear to be making a push for greater equality. The festival will grant an honorary Palme d’Or to Agnès Varda and has partnered with French luxury and lifestyle group Kering, which will host a series of talks titled “Women in Motion.”

Model-turned-actress Aymeline Valade, wearing a Ulyana Sergeenko gown and Chopard diamonds, said she was inspired not only by actresses like Moore, but also by the likes of Hillary Clinton and British suffragette Emmeline Pankhurst.

“I would love to see a female Steve Jobs,” she said, lamenting the fact that women shook off the shackles of domesticity in the Sixties only to end up being largely objectified. “Maybe now we are done with those extremes and we are finally getting to the interesting part, which is the substance and content,” she mused.