By Katya Foreman and Alessandra Codinha on May 22, 2013
View Slideshow 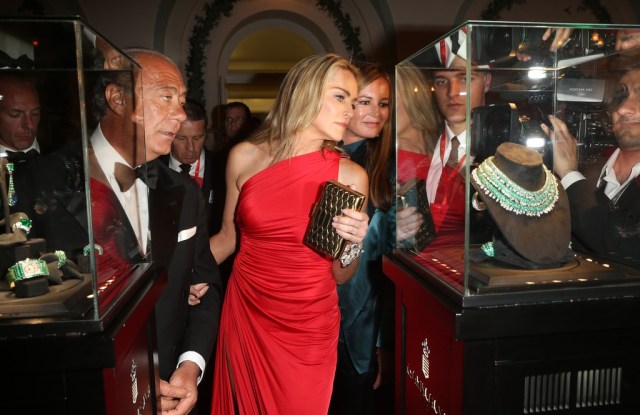 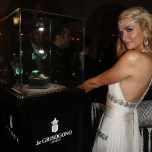 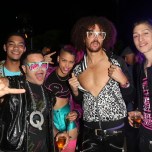 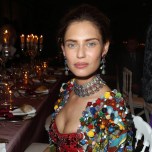 Fawaz Gruosi squired Sharon Stone — resplendent in a Roberto Cavalli gown slit to the thigh — along the lengthy stretch of the step and repeat at the entrance to his 20th annual party for de Grisogono at the Hotel du Cap-Eden-Roc on Tuesday night. Partygoers nestled along the benches as an orchestra played strains of songs by Coldplay and Katy Perry. Paris Hilton, a diamond headpiece pinned into her hair, posed for photos and admired her surroundings. “Look how beautiful the hotel looks, it’s like something out of a fairytale,” she sighed.

Eva Cavalli, Stacy Keibler, Jessica Hart, Julia Restoin-Roitfeld and Vladimir Restoin-Roitfeld were all on hand, arriving as the sun sank and the temperature plummeted. Staff passed out heat-reflective blankets in silver and gold foil along with hors d’oeuvres to some guests.

Alessandra Ambrosio folded hers up like a wrap, covering her arms and crossing her back, the gold side facing out. “It matches my dress,” she noted of her gold beaded gown, “I may take this with me for the rest of the parties this week, just in case.”

Following the fashion show was a VIP dinner for 500 inside the hotel and performances by The Gold Singers, Evdokimov Show from Russia and DJ Julio Santo Domingo.

Stone, who stars in the upcoming “Lovelace,” had attended the premiere of Steven Soderbergh’s Liberace-focused film “Behind the Candelabra” earlier that day. Did she think the pianist would have appreciated the party? “Diamonds, glamour, the orchestra, all that crinkling gold… what do you think?” she asked.

Back in Cannes, meanwhile, Antoine Arnault snapped photos of the yachts in the harbor with his Blackberry as he arrived at The Beach Ball, an event benefitting his partner Natalia Vodianova’s Naked Heart Foundation charity and FilmAid International in partnership with Cinemoi. “First I have to make my friends jealous as I literally just arrived 30 minutes ago from Paris,” he laughed, before pressing the send button.

Melissa Odabash swished by in a sequined mermaid dress by Julien Macdonald, her chaperone for the night. The swimwear designer chatted about her latest range for Gwyneth Paltrow’s blog, Goop. “Yes, that was me,” she laughed when the subject of the recent brouhaha over her bikinis for kids came up.

Macdonald said he’s designing eight costumes for the English National Ballet for a special performance for the Queen Elizabeth’s Diamond Jubilee celebrations. The show is take place in front of the royal family at Kensington Palace in June. “The costumes are sponsored by Swarovski and it’s going to be a very glamorous sparkling occasion,” said Macdonald. “We’re hoping Kate [Middleton] will have had the baby by then, she is due to be there.”

Other guests at Vodianova’s event, which climaxed in a dramatic fireworks display, included former Scary Spice Melanie Brown, who wore a body-con gown by Basil Soda; actress Radha Mitchell; and singer Alison Moyet, who performed some songs. Oscar Isaac, the lead in the major Coen brothers-helmed Palme d’Or contender, “Inside Llewyn Davis,” also took to the stage during the night to present a short documentary by FilmAid.