Cannes Parties On in the Rain 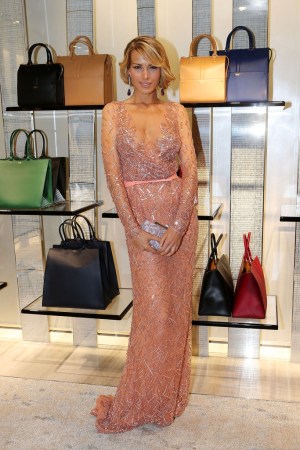 Partygoers at the Cannes film festival seem determined not to let the threatening skies snuff out the fun. “You have to dance in between the raindrops,” said Petra Nemcova at a cocktail for the new Giorgio Armani store on the Croisette on Wednesday night.

Fresh from attending the premiere of “All Is Lost,” starring Robert Redford, the Czech model was dressed in an Elie Saab gown accessorized with Chopard baubles and a gold bracelet she just launched in partnership with the house for her charity, the Happy Hearts Fund, with profits going to rebuilding schools after natural disasters.

Nemcova said she is preparing to launch a lifestyle line inspired by “different countries and their treasures,” starting with a range of candles that will debut in October.

Stacy Keibler said she is working on a food line. “I’m focusing on health and nutrition these days,” she said before facing the flashbulbs.

For her private dinner aboard the Cavalli yacht, Eva Cavalli set out leopard-print throws galore, crystal candleholders, and an array of tasty dishes “brought over from Florence.”

“I had a heart attack when it started to rain today. We have invited so many people and now we’re going to be a little bit squashed inside,” she sighed, handing out glasses of Cavalli-branded wine and vodka to guests.

Sharon Stone, who had moved to the boat’s covered upper deck for an aperitif with Princess Charlene of Monaco, had lots to say on the subject of the weather.

“The best thing to do is to know that it will be raining, if ever you can, and not wear a plastic bag like some people have done to previous presidential inaugurations,” deadpanned the actress, adding: “Just throw your hair up, keep it natural, wear some waterproof mascara, and try to wear things that aren’t going to get screwed up in the weather. And the best thing you can wear is sensible shoes.”

Reclining on a couch scattered with leopard-print cushions, Kylie Minogue blended into the scenery in her animal-motif dress. Goga Ashkenazi chatted about her upcoming projects for Vionnet, including an installation for Art Basel based on an imaginary room in Madeleine Vionnet’s house.

“We haven’t decided which one yet but I’m thinking maybe a shower, because a sitting room or a bedroom would be too obvious. We’re looking at a bunch of artists who we will collaborate with,” she said, adding that Vionnet plans to launch a “residency” program for artists and create a board made up of figures from the fashion and art worlds to select the artists.

“I mean mixing art and fashion, I did not invent this, but I am trying to do it in a less obvious way to create something more interesting and edgy, something that can appeal to the young and cool as well as the older crowds,” she said. As the newly appointed honorary president of La Scala in Milan, Ashkenazi also revealed she is planning a big Vionnet event at the opera house during Milan Fashion Week in September. “We are not sitting still,” she said.