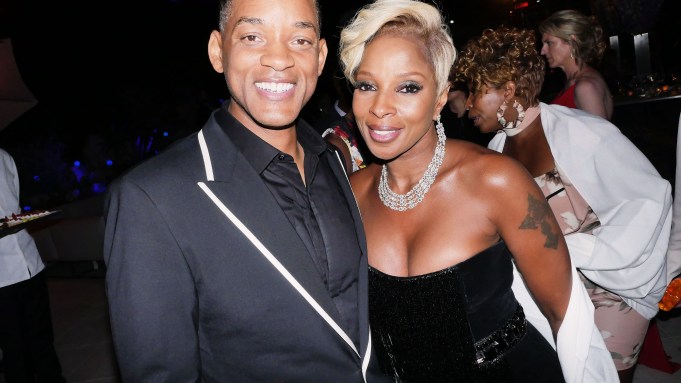 Drawing a heady constellation of players from the worlds of entertainment and politics, Vanity Fair’s Saturday night bash with HBO, held at the Hôtel du Cap-Eden-Roc in Antibes, France, lived up to its golden-ticket status.

Guests including Clint Eastwood, Tilda Swinton, Emma Thompson, Al Gore, Ben Stiller, Julianne Moore and Jake Gyllenhaal dined on artichoke risotto and roasted blue lobster before descending to the restaurant’s lower deck for the after party, cohosted with Chopard. Serenaded by a soundtrack of crooner classics that enhanced the “Great Gatsby” mood, the revelers spilled out onto the terrace with colored lights illuminating the trees and super-yachts bobbing on the horizon. Waiters circled, proffering boxes of cigars and foie gras bites.

The event marked the 70th anniversary of the Cannes Film Festival.

Dressed in a black gown with a dramatic train by Ralph & Russo, Arizona Muse gazed at the infinity pool, which — in keeping with tradition — had Vanity Fair spelled out across its surface in red letters. “I just can’t work out how those letters stay straight. How is the Vanity Fair floating and not moving? It’s a mystery. Anything else in a pool kind of floats away at all angles and just disappears,” she marveled. “The view is just amazing, you’re looking right out to sea and you’re looking out at all these beautiful boats. And I love that it has quite a retro feel, it transports you to another time.”

Sticking close to Saint Laurent’s Anthony Vaccarello, Charlotte Gainsbourg, whispered how privileged she felt to have opened the festival alongside Marion Cotillard as the leads in Arnaud Desplechin’s “Ismael’s Ghosts.” But her favorite memory, she confessed, remains winning the best actress prize in 2009 for Lars von Trier’s “Antichrist.” “It’s a big memory for me, but I wish I had something more generous to share.”

Gallery: Inside the Vanity Fair Party in Cannes >>

Dressed in an itsy-bitsy minidress, Mary J. Blige was wrapped up in a blanket. “I’m wearing Balmain, but I can’t show it off because it’s so cold,” exclaimed the singer, who is about to embark on her Strength of a Woman Tour. She was still having a ball. “I love it, there’s so much freedom here. You just come here to have a good time and see a bunch of people who you don’t normally see, and that you want to see,” said Blige, who shared some color on her role in “Mudbound,” due out in October and costarring Carey Mulligan and Jason Clarke. “It’s a very deep film, it’s a tearjerker; I don’t even think you’ll recognize me in it, that’s how much of a tearjerker it is. I transformed, I committed to the character,” Blige said. “It’s set in the Forties, and I play a mother who’s trying to keep her family strong and take them through racism. It’s a period piece, so it doesn’t look like me at all. There’s no makeup, there’s no wigs, it’s all natural everything,” she added, as Elle Fanning glided by, unwittingly shedding gold chains from her Prada dress.

Enjoying an after-dinner cigar, Arnold Schwarzenegger shared the tales behind his knuckle duster rings. “This is the governor’s ring, there’s the governor’s seal. I offered the same ring to the 10 most loyal people around me when I finished the governership, and then the guy who made them made me one in gold with diamonds,” he said. “And this is a skull that my daughter gave me for Christmas, because she knows I like skulls.”

Doing the rounds on the arm of Mulberry creative director Johnny Coca, Amber Valletta revealed she’s due to start work on a short film about sustainable fashion due out in early 2018.

As the dance floor cranked up, Swinton retreated to a set of chairs on the far side of the terrace, dressed in a black-and-white polka dot dress by Loewe, to catch up with friends.

Chatting with Microsoft cofounder Paul Allen, meanwhile, Will Smith, dressed in an edgy tuxedo with white stripes, discussed festival jury duty. “I am growing cinematically by leaps and bounds. Four translators around the table discussing films, it’s quite spectacular.”

“Beautiful weather, nice company,” said an approving Eastwood, who earlier in the day presented the 4K Blu-ray remaster of his 1992 film “Unforgiven.” When asked what he was preparing for his masterclass the next day, he quipped, “I don’t know, any subject — even making movies.”

Chopard and Rihanna Celebrate Hook Up in Cannes