Nick Cannon and Rev Run were among those who turned out to celebrate the luxury auto brand’s new New York digs over a sunset cocktail hour. 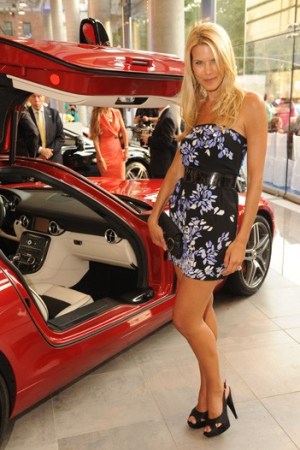 On Tuesday night Mercedes-Benz opened a 330,000 square foot dealership on Manhattan’s 11th Avenue, where instead of foil flags and a live broadcast from the local classic rock radio station, the German automaker offered truffle-enhanced risotto and a performance from Matchbox 20 in the park across the street.

A bright red SLS AMG greeted guests at the door, alongside a smiling representative of the sales staff. Partygoers, including Beth Stern, Alexa Ray Joel, Fern Mallis and Al Roker, sipped drinks and chatted around the new models on the spacious showroom floor. Joseph “Rev Run” Simmons arrived with his wife Justine about 45 minutes into the festivities.

“My brother just got a new one of those, silver,” he said motioning to a maroon Maybach 57 in the foreground. The manufacturer’s suggested price for a 2011 model is $372,500. Simmons wore all white shell-toe Adidas and a preacher’s collar. WWD wondered how a man of the cloth might reconcile his spiritual leanings with such material trappings.

“It’s all in one,” the Rev explained. “God so loved the world that he gave his only begotten son. He loves the world. It’s a beautiful place. People’s creativity — all the great big houses, colorful yachts and stuff is somebody’s creativity [working] to make things happy and beautiful… If you want to go and give to the poor that’s a whole other thing, but it doesn’t mean stop being creative and creating beautiful things. I don’t let that bug me out like, ‘Oh you’re going to hell for having a Mercedes.’ If you’re very wealthy, give! But that doesn’t mean you can’t enjoy having a good time and buying a Maybach.”

A bit later, Simmons joined Nick Cannon on the second-floor, where they posed for photos in a silver 1937 roadster. A p.r. rep mentioned that Cannon, who recently had twins with wife Mariah Carey, had been checking out vans.

“You gotta get it for the family, you know what I mean?” Cannon explained. “It has to be practical but comfortable at the same time… I see Mariah, the kids in the back of the van. It works.”

The vintage model he had just exited, then, seemed out of the question.

“I was talking to the Rev – it’s $12 million!” Cannon said. (A Mercedes employee had earlier explained that the car sold at auction for $8 million. But who, at that point, is counting?)

“I like taking pictures in it,” Cannon said. “Let’s just say that.”