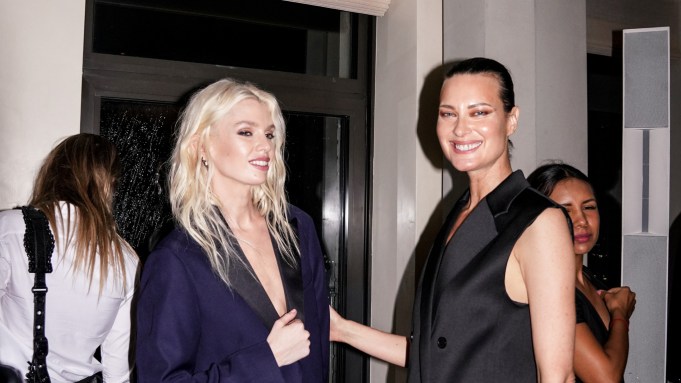 Let’s get this out of the way: Parties (and runway shows, for that matter) should not be held in venues with only a single elevator providing access.

The latest culprit was the Cara Delevigne and Karl Lagerfeld party Monday night, hosted at Saga, a fine-dining restaurant on the 63rd floor of a FiDi building. No matter how good the party, nothing kills the mood like waiting in the lobby for 40 minutes sandwiched between influencers.

Once the elevator arrived and whisked guests upstairs, news was delivered that the evening’s host, Ms. Delevigne, would not be in attendance. That didn’t deter the crowd from having a good time, however. Amber Valletta — another Lagerfeld collaborator — stopped by, dressed in casual chic perfection in a white oversize button-down and jeans; Nina Dobrev made a beeline for the breezy terrace outside, fanning herself in the cool wind of the night. Other VIP guests included Evan Mock (is it a fashion week party without Evan Mock?), Keke Palmer, Shalom Harlow, Becky G, Candice Swanepoel, Ella Emhoff, Amelia Hamlin, Hayley Law, Jamie Campbell Bower, Lara Stone, Ella Travolta, Shaun Ross and more.

Anyone who wasn’t a celebrity was seemingly a TikToker, based on the amount of content being snapped up right and left. What can we say — no matter how many times you see it, the New York skyline just doesn’t get old.

The Cara Loves Karl capsule collection is gender neutral and ranges in sizes from XXS to XXL, and is available for a limited run online and at the Cara Loves Karl pop-up shop at 105 Wooster Street in New York City and The Grove in Los Angeles.