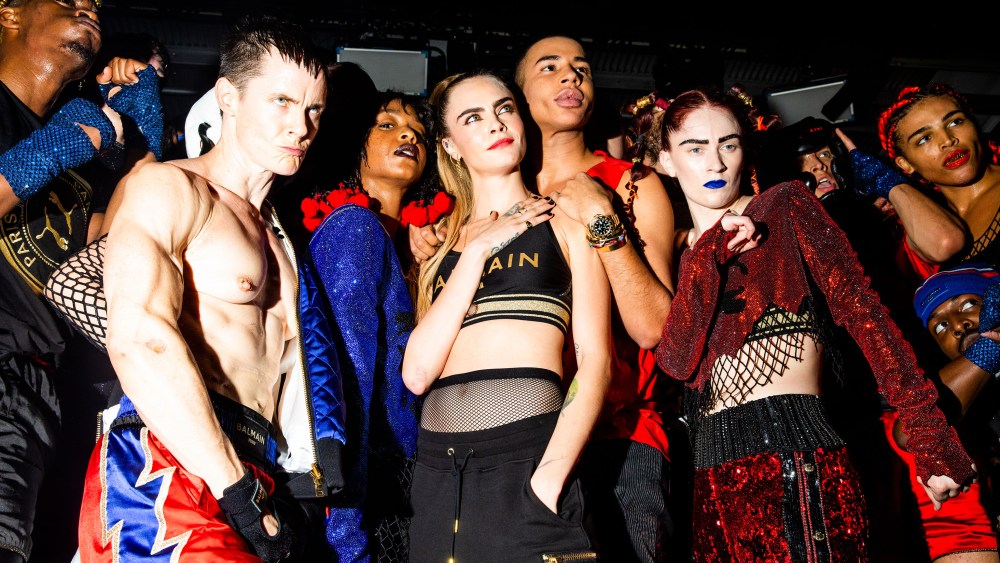 Cara Delevingne and Olivier Rousteing could have celebrated their fashion collaboration — the global Puma and Balmain campaign featuring a 35-piece collection — anywhere in the world. And here they were hosting the party in Los Angeles. Why L.A.?

“That’s a freakin’ good question,” said Delevingne, turning to Rousteing. The two sat alongside each other inside a closed off space of Milk Studios, moments before the event kicked off.

“Yes, why?” responded the French designer with amusement.

“I don’t know,” Delevingne continued. “We both are working in Europe, so I find it weird that we picked here. I think L.A. was — the place that needed it most?”

“With the international feeling we wanted to push with the campaign, L.A. was the best way to make it even more international,” added Rousteing.

It’s not just a “normal” fashion campaign, shared the model and actress. “This is about diversity and inclusivity. Taking it out of somewhere like New York or Paris or London, fashion cities — L.A. has more of an eclectic mix of entertainers.”

“There’s something incredibly powerful about the way the whole Balmain brand has styled women,” Marshall said of the luxury house. “I love the sharp angles, the shoulder pads, the return to the Eighties, when women had the power b—h look, the female wolf of Wall Street. There are elements of that in the clothing. I think there’s an armor that a woman puts on when she goes out into the world, and these clothes very much are symbolic of that.”

“I feel like a different person when I have this on,” Balfour said of her minidress. “This feels like a really creative collaboration. I really love the ethos behind the line.”

The campaign, inspired by the sport and art of boxing, was splattered throughout the space. A row of punching bags hung at the entrance, and at the center of the room was a ring surrounded by bleachers. Guests mingled with cocktails, munching on popcorn, and at a quarter past 9 p.m., they gathered to watch the entertainment of the night: a group of dancers from the campaign, donning looks from the collection, took the stage to perform a powerful routine, a message of love and unity. Delevingne and Rousteing watched on before disappearing, only to reappear on stage wearing hooded robes, which they stripped off dramatically. They then hugged and did a piece of their own before inviting the performers back up for a dance party.

They shot the campaign, she said, in one night and came up with the concept on the day of.

“Literally there,” she continued. “It inspires me to go, you know what, when there’s so many weeks of prep and so many look books and things you have to approve, photographers and all this stuff, sometimes you make a shitty campaign for nothing when actually you can do it on the day with your friend.”

For his part, Rousteing said it was his “best campaign ever. You know me, working for Balmain, it’s about diversity and pushing boundaries but being with her now with this collab, it’s beyond everything I did before.”

When Delevingne was approached by Puma to collaborate with a designer, Rousteing was her first and only choice, she shared. The two had worked together for a collection of leather Balmain handbags, but this was their first time designing clothing.

“I love him as a designer, but I always wished I could work with him more just so we could hang out,” she said. “But I didn’t really understand the depth and how beautiful our, not just friendship but, working relationship could be. I feel so free with him, so accepted and myself and crazy and emotional and strong. Stronger than I’ve ever felt working with anyone, to say my ideas and be listened to. It’s f–king special man.”