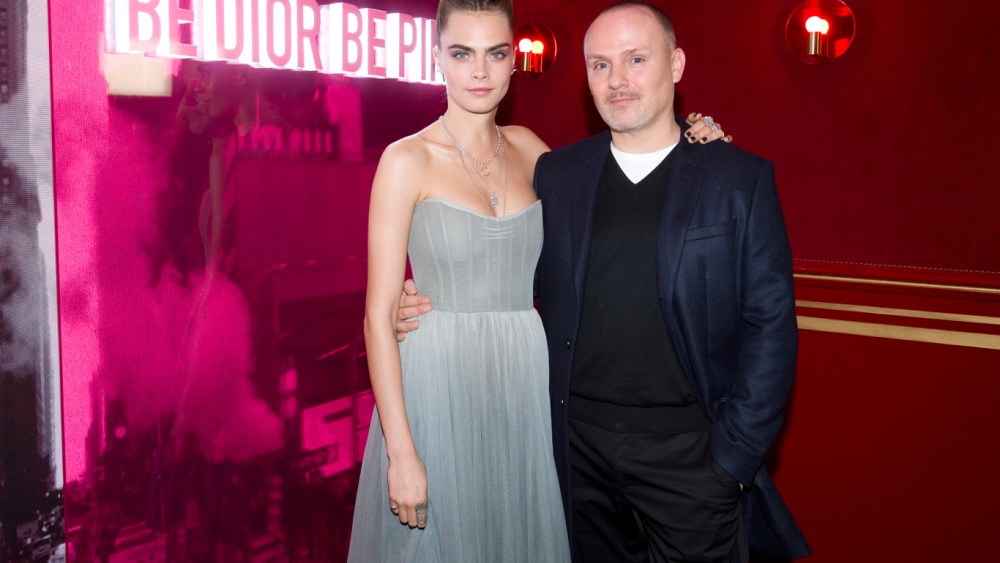 PRETTY IN PINK: “It’s about being confident, unique and unapologetic for being who you are,” said Cara Delevingne Monday afternoon at Le Bristol hotel in Paris, referring to the message she hopes to impart as the face of the new Dior Addict Stellar Shine lipstick line, due out in March. “It’s not just about beauty from the outside; it’s about being happy. Christian Dior said he wanted to make people happy, not just beautiful.”

Stellar Shine lipstick is meant to elevate the Dior Addict range. “Dior Addict always was like the younger sister of Rouge Dior; we wanted to make it as iconic,” said Peter Philips, creative and image director for Dior makeup, about the collection that’s centered on pink hues. “It feels like a balm; it’s long-lasting.”

Delevingne explained that makeup — in general — helps her prepare for acting roles. “It really makes a difference,” she said, adding applying color cosmetics is not her forte, though. “I’m better [making up] other people than myself. I can get my friends to do my makeup in return, which is fun, because part of doing makeup is…self-care, knowing that you care enough about yourself to express yourself in a certain way. And that is part of self-love.

“Makeup isn’t just about being feminine,” said Delevingne. “It’s about masculine and feminine — expressing whatever that is. Pink makeup shouldn’t only be for women, it should be for men — it should be for everyone, inclusive.”

She added: “Beauty shouldn’t be exclusive. Everyone should have the right to feel beautiful. I do think that we are moving towards that more and more, but no one should ever be made to feel ugly. Ugly people are the ones who use hate; it has got nothing to do with what you look like. We all desire to change things about ourselves, but when you realize you don’t need to change anything — you’re enough, that’s what I want beauty to feel like.

She recently finished filming “Carnival Row,” the TV series created by Amazon Prime. “It is going to be out this winter. I play a very strong female character, who is a…fairy, as well, which is wonderful.

“I’m trying to continue learning about film,” explained Delevingne. “I really want to direct and write more projects…and continue giving back and doing the activism I’m trying to push forward. I have created a foundation.”

Social media (she has 41.2 million Instagram followers) has also been a dynamic means of sharing her message. “I think when I’m doing something right, it’s when I lose followers,” said Delevingne. “If you don’t agree with what I say, you shouldn’t be following me.

“There are a group of boys and girls who are very young, who I’ve managed to see through very tough times in their lives — whether it’s having to deal with a parent’s death or illness or their sexuality or depression,” continued Delevingne. “I’ve got to see [them] come out the other side, and in a way they feel like my children.”

Her advice to negative feedback on Instagram is: “You have to love yourself. It doesn’t matter what other people say. For people who have bad experiences…it’s not about fighting back or retaliation, it’s about taking a higher path.”

Delevingne said she’s grateful “not only for doing what I do, but to just be alive every day. I really try now to take care of myself a lot more in terms of taking time off, going and doing meditation. For me, that’s one of the most important things I do with my day to really be able to check in with myself.”

A few hours later, Delevingne hit the Roxie with a bevy of other guests who helped her celebrate the new lipstick launch. At the Right Bank restaurant, too, was Jean-Baptiste Mondino, who said he would probably attend a number of shows this fashion season, including Rick Owens (“a friend of mine”) and Celine (“because I like Hedi”).

Olivia Culpo had just wrapped a TV show called “Paradise City.” “I play the girlfriend of a struggling musician who deals with drug and alcohol addictions,” said Culpo, adding on the fashion front, there’s a capsule she’s just designed in the U.S. with Express, called Express x Olivia Culpo.

L’Express (Express à la française) was the publication at which Eva Herzigová had recently served as an art director. A favorite thing to do in Paris? “I love going to the pharmacies — getting the physiologique water for cleaning your eyes. It’s so good. They have like everything,” she said.

Beauty products were on everyone’s mind at the fete. Kitty Cash, for one, shared a tip: “Stay hydrated, that’s my beauty secret.”

The music maven was mum on upcoming projects, save to say: “Know that I am having a lot of amazing new work in the works for the later end of the year.”

Bryanboy was marking his 10th year of attending shows in Paris. While in the City of Light, he enjoys eating Asian food, especially Japanese cuisine on the Rue Saint-Anne, and shopping on the Avenue Montaigne.

Revelers finished up the night being serenaded by Mabel, flanked by two female dancers.