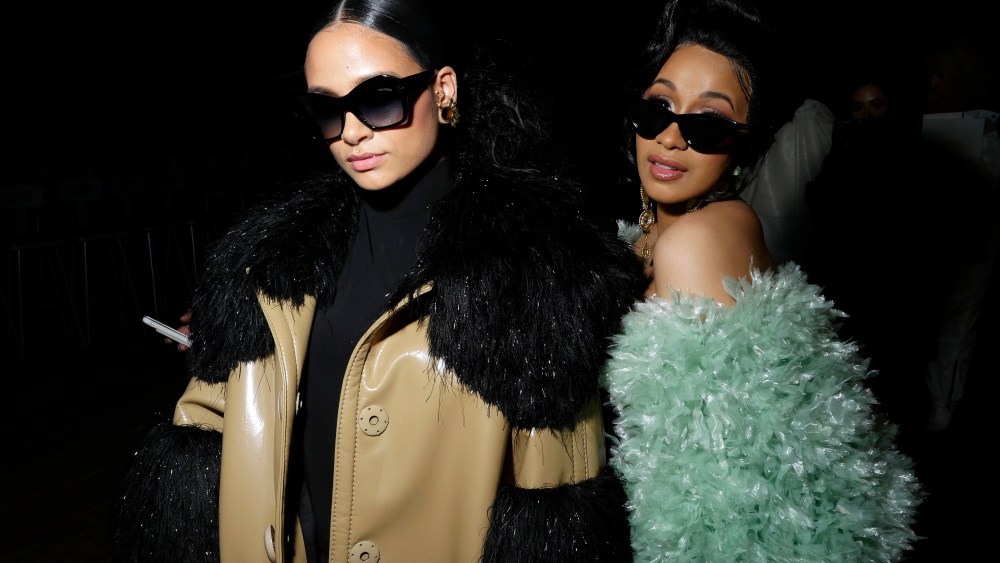 “This is my second show to see in New York — I’ve never come to see shows, ever,” Herzigova admitted. “This is new, in a way. I saw Michael Kors this morning and now Marc. He’s a friend and I’m here, I came for work.”

Taking in the show from the seats is still “completely different” for the model, but she noted that the show-going process in New York didn’t feel that far off from Europe. “it’s just different people,” she said.

Harry remained rather tight-lipped about her Marc outing. “He surprises me — his things are just beautiful,” she said of her reasoning for coming out, her first this season.

“I have a whole new respect for fashion. I came to fashion week a couple years ago, and I feel like fashion has, each year, just taken a totally new turn. I feel like Marc Jacobs always has this eclectic, cool, effortlessly fun style and I think his shows are amazing,” she said. “I’m very grateful to be here to see what’s next for him and what’s next for everybody else, because everybody is going to be wearing it.”

Between shows (she also attended Zimmermann) she’s been avidly watching the Winter Olympics: favorites so far are ice skating and snowboarding. “Also, Shaun White is a total babe. Like, what?  When did that happen?” she said.

Ricci’s entertainment of choice this week has been “lots of baby programming” (she has a three-year-old) over the Olympics, with a few fashion shows mixed in.

“I love coming [to a Marc Jacobs show] and being a part, still, of his world. It’s nice to go to shows that are a really holistic artistic expression,” she said.

The longtime fashion lover said she first knew she wanted to be part of the fashion world when she was 13. “I fell in love with fashion when I did my first cover shoot with Bruce Weber and Joe McKenna put me in Galliano in 1993, so it was those pastel sash dresses that he made,” she said. “And I remember wearing that dress and being like, ‘oh yeah, I’m inspired to live my entire life in this dress right now.’”

Down the row from her sat Raf Simons, fresh from his Calvin Klein show, where Ricci had been the night before, wading through popcorn.

“I managed to wiggle them out before I got in the car,” she said. “But I did notice some popcorn kernels on my son’s floor this morning.”

Next Up in the Industry? Ellery Harper, Laura Dern’s Son