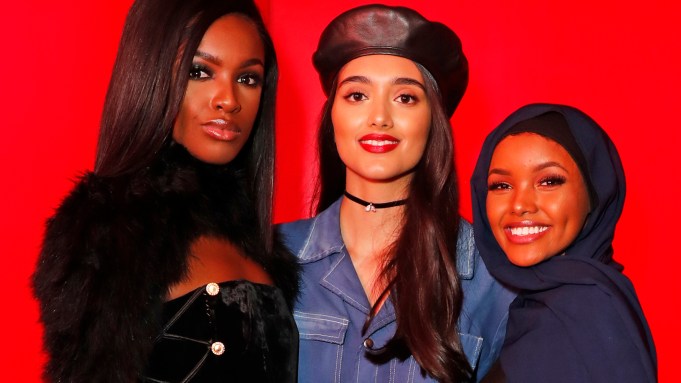 SINFUL: “Let’s just say it’s a big production,” said Carine Roitfeld with Gallic understatement, ahead of the third annual Veuve Clicquot Widow Series, called “Seven,” for which she created an immersive experience that saw guests traversing through seven scenes that brought to life her vision of the Seven Deadly Sins.

“I am coming from the world of fashion, of course, and this is the first time I have worked on an artistic project of this level, let’s say,” she said. “I need to be surrounded by fashion: it’s where I am from; it’s what I know. So there are a lot of fashion people that helped me by giving me the dresses to make the looks.” Lagerfeld even donated a tablecloth for one scene.

Held at a cavernous underground location in Islington, guests entered at street level and were met with the sight of several Carine-alike “widows” (an insider’s tongue-in-cheek allusion to the night’s hostess), that stood sentry over coffin-shaped ice boxes in the first room of the event, all clad in seductively cut black Tom Ford dresses with trademark Roitfeld sharp bobs, towering heels and glowering expressions. They poured the fizz from their lofty stations but it was served by countless handsome waiters, themselves a nod to the notion of temptation.

Roitfeld’s “widows” were inspired by her recent trip to the Veuve Clicquot Maison. “I met the Widow two weeks ago,” joked Roitfeld in reference to the Champagne brand’s namesake Madame Clicquot, who took control of the Maison when she was widowed in 1805. “I didn’t know who she was, honestly, I knew the [term], ‘The Widow,’ but I never thought about the woman behind [the story]. And she was so modern for her time she said, with Kinmonth noting that after her husband died when she was just 27, she “became rather released unto the world of business” to become a “complete innovator” and the first person to copyright a color, the Veuve Clicquot yellow.

From there, guests made their way through the seven scenes, each dedicated to one of the sins and its opposite virtue, all set out in tableaux designed to elicit emotional responses. “Maybe they don’t like it, maybe they are going to love it, maybe they will be shocked, maybe they will say, “Oh my God, it’s disgusting,’ I don’t know,” explained Roitfeld. “I hope people have an emotional [experience]. You like or you don’t like, but you are not indifferent; Indifference would be the worst.”

Pride, the first sin, was countered by Humility via undulating carnival mirrors that warped and distorted faces and bodies. Not many people Instagrammed there. Next up was Gluttony, odoriferously represented by a glass tank filled with rotting food: oysters, mussels, yams, bananas, pasties (a typical British savory stuffed pastry), wilted greens, pizza slices, strands of spaghetti and black bananas. Oddly, no flies. Its opposite virtue was exemplified by a single oversized blue-and-white capsule in a visual gag not wasted on the fashion crowd.

Greed and Charity had arms writhing from two opposite walls, some grabbing, some giving; The unsettling Wrath and Patience scene featured Italian actor and perfumer Luca Calvani in evening dress and seething at a model dressed in an elaborate white gown embroidering as she serenely stared back.

Roitfeld and Kinmonth used lots of fine red latex and a skin-tight red dress by Atsuko Kudo to play with the idea of Lust and Chastity; and a stack of grubby mattresses with protruding limbs represented Sloth, inspired by, said Kinmonth, by the fairy tale of the Princess and the Pea.

“I did look a lot at fairy tales for inspiration; those stories that always stay with you,” Kinmonth told WWD, adding that he has been concurrently working on the set design and costumes for “Sleeping Beauty” at the new Stavros Niarchos Foundation Cultural Center in Athens. “[This venue] has this magic quality which is, you enter at street level and then you just go down and down and down and down underground,” he said. “It’s a journey downwards, which in a way comes from the original idea of Dante’s “Inferno,” where these vices and virtues were beautifully articulated by Dante. He talks about the descent into the imagination, into our psychological depths, into our emotional depths, into an area where provocation a choice is kind of presented to every single person that goes in there [and] I am hoping that what we have achieved is a slight destabilization your sense of the ordinary and that you kind of get involved with the performers.”

“Gluttony is my favorite sin, especially after fashion week,” said Victoria’s Secret angel Leomie Anderson. “I’m gluttonous all day, every day. I’m one of those annoying people. I’ve been to the gym maybe, like, four times. I lose weight really easily as well, I know how that sounds! But [the other Victoria’s Secret models] all have boobs and I haven’t got any so I said I need to have something on the runway to shimmy and shake.”

Food is also the chief corruptor for actress Sai Bennett. “I have got a real thing for fried chicken,” she confessed.

But model Neelam Gill is more likely to be tempted by the pleasures of the flesh. “Lust is my favorite! I hate envy — envy and anger have no place in my life. Lust is best,” she said. “Plus, I’m newly single right now so…”

Roitfeld follows Nick Knight and FKA Twiggs, who previously collaborated with Veuve Clicquot on the annual event that celebrates creativity and Halloween. The event will be open to the public on Friday the 20th and Saturday the 21st of October. Tickets, available at veuveclicquotwidowseries.co.uk, cost 35 pounds (or $46.10 at current exchange), and include a glass of Veuve Clicquot Yellow Label on arrival. Fifty percent of proceeds go to supporting amfAR, The Foundation for AIDS Research.