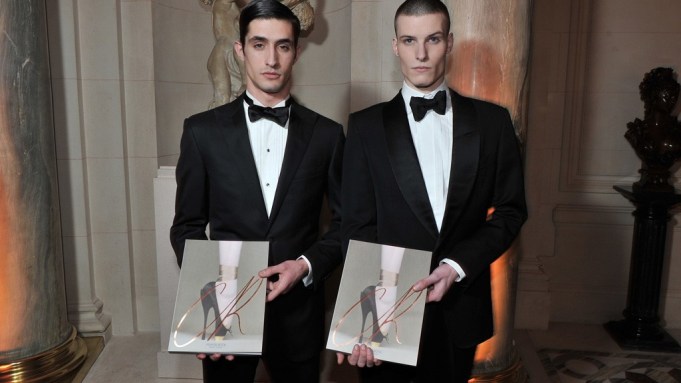 Kate Moss rocked the dance floor on Tuesday in a jaw-dropping sheer jumpsuit from Saint Laurent, freshly picked from the runway. Karl Lagerfeld, Riccardo Tisci and Jessica Chastain were also swinging it at the Shangri-La Hotel in Paris to celebrate the second issue of Carine Roitfeld’s magazine CR Fashion Book, which has a dance theme.

Marie-Agnès Gillot, principal dancer at the Paris Opera, performed a pas de deux with Vincent Chaillet while Karlie Kloss shared a piece of her past. “I studied ballet every single day after school when growing up, but then grew too tall and realized that a professional ballet career was not in my future, and I used my height for other things,” she smiled.

Tisci said he loves salsa, while Lagerfeld’s favorite is tango, though he refused to dance in front of photographers.

“Jitterbug,” shouted Chastain. “What’s yours?” she asked her boyfriend, Gian Luca Passi de Preposulo. He said it was the twist and made his point with a solid presentation for Chastain, who immediately followed in his steps.

“Movement is key. It’s a wonderful thing when you can get to a place where you let go, uninhibited,” said Adrien Brody. The actor has just finished shooting Wes Anderson’s film “Grand Budapest Hotel” in Germany. “It’s a fable,” he said. “I did another film with Paul Haggis shot in Rome, and I will be doing a film in the South of France this summer. I’m very European.”

Gaia Repossi was sporting an eye-catching cuff made from 6,110 tiny diamonds, following an abstract pattern. “It was inspired by the Vienna Secession and represents branches,” she explained.

Peter Dundas, clad in a white tuxedo, said it would be his turn next to throw a party. “I’m opening two flagships — a big shop in Paris next October during fashion week,” revealed the Pucci creative director. He added that the second store would be in Rome.