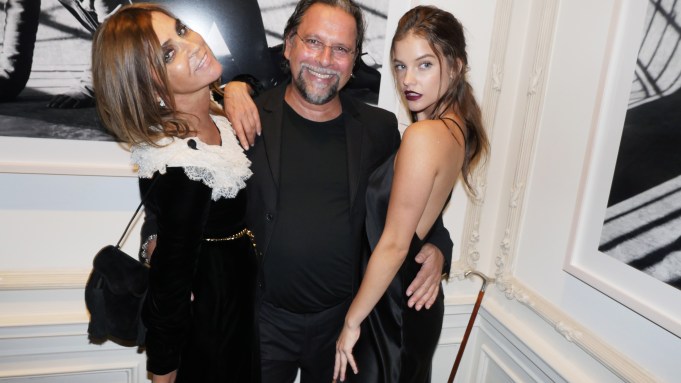 A trail of cigarette smoke beginning on 78th Street and Madison Avenue served as breadcrumbs for those bound for Carine Roitfeld’s cocktail party with Gianvito Rossi Thursday evening, which, in addition to a roster of models, hosted many French nationals.

Young Frenchmen drinking Moscow mules appeared particularly civilized next to the fedora-topped gallery bros attempting to avoid getting caught gawking at the shot of Caroline Vreeland in nothing but leggings.

“I always wanted to work with her,” said D’Orazio of the three-day shoot with Roitfeld, which took place last October and features 21 girls all clad in Yeezy. “She allowed me to do my thing. And that’s the sign of a great editor. She brought the material and allowed me to do my thing — she even suggested that I shoot film. So this is all shot on film. For someone to say that you have to know about the photographer.”

“I didn’t do a lot — the girls came and I left them with Sante,” Roitfeld said of the shoot. “Just her and Sante made the photo so intimate and special. I dressed them before and after and I let them go.”

The exhibition of the Yeezy-styled shoot came the day after Kanye West showed his fourth season of his collection, to rather scathing reviews, in part due to the execution of the show. “For a little French girl it was a little touristic trip — it was a little far away, and a little hot,” Roitfeld said of the Roosevelt Island location. “But I think Kanye is a crazy genius. I think it was hard for some girls — some girls started to faint…but he does fashion collections in his own way.”

One of the girls, Blue, arrived in fresh-from-the-runway Yeezy season 4. “Kanye is a great person. I feel like we’re alike in many ways, which is why I continue to work with him,” she said. “The clothes are great — they’re very youth-friendly. It looks great on all different body types, races and genders.”

The previous day’s show was “chaotic,” Blue admitted. “Everybody is so stoked about anything Kanye does. It was a great show, I think it turned out pretty well. It’s a fashion show, you know? Things happen.”

That’s one way to put it.