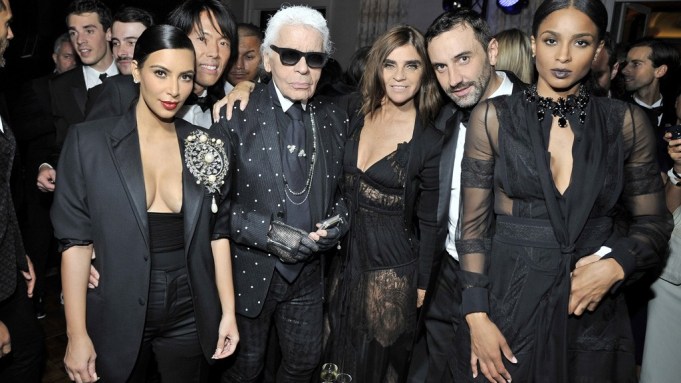 HAVING HER CAKE: Carine Roitfeld blew out the candles on an oversize, off-kilter birthday cake Tuesday night at The Peninsula Paris hotel. Kim Kardashian, Karl Lagerfeld, Riccardo Tisci and Ciara were among those on hand to mark the occasion.

The party hosted by Roitfeld and Stephen Gan was both to celebrate her birthday and the fifth issue of CR Fashion Book, fronted by Beyoncé and shot by Pierre Debusschere. There was a performance by Jessie Ware, who also sang “happy birthday Carine.”

“The fashion world is good to me,” said Ware, sporting an Armani suit. The British singer also did a concert at the Le Trabendo venue in Paris last Friday.

“It’s very intimate, a great venue!” she enthused. “I will have more concerts around the new year.”

Shots of guests were displayed on a large cubical Instagram installation.

Tisci – who was the guest creative director of the Beyoncé fashion series – knows a thing or two about lavish birthday parties. The Givenchy artistic director celebrated his 40th in Ibiza this summer with Kate Moss and Naomi Campbell, among other friends.

“It was a big one,” said Tisci, adding he is now off to Morocco and then Costa Rica.

“The biggest birthday party I organized was for my wife,” said Tommy Hilfiger. “It was for her 40th birthday at Cipriani on 42st Street. We had Nile Rodgers and Chic play. It was a great party!”

The designer also disclosed he plans to open a new store in Paris on the Rue des Capucines, adding to the location he already has on the Champs-Élysées.

Daniele Cavalli and his girlfriend Magdalena Frackowiak have just celebrated their one-year anniversary together.

Son of Roberto Cavalli and the former creative director of the label’s men’s wear, Cavalli has settled back in Florence after a five-month stint in in New York. “I am working on a photo show,” he said, adding it could open during Art Basel.

“I want to pursue both cinema and fashion,” said Hermès-clad Aymeline Valade, who is on the lookout for new film projects following her performance in the movie “Saint Laurent.”

“I thought your first film is the most important, but I think the second one is even more important,” she said.

David Koma, fresh from his first runway show for Mugler, turned 28 on Sept. 4. He had a surprise birthday party.

“You go to the office; everyone is working very quietly, and suddenly they celebrate your birthday with loud music and give you presents,” he said, noting Mugler’s Virginie Courtin-Clarins organized everything.