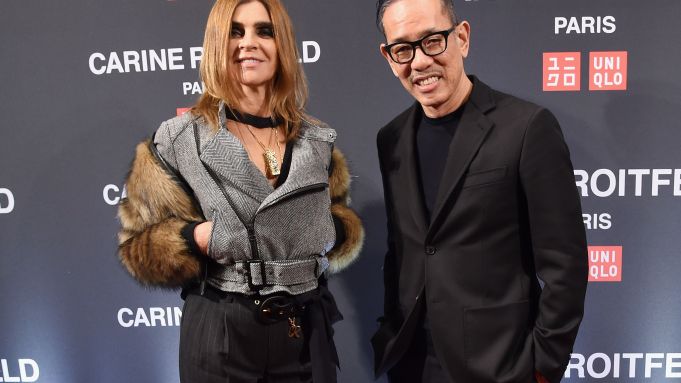 “This is my best side,” said one blonde model-type, switching places with her photo partner from the dimly lit dining room of Indochine.

“You can always flip it around,” their obliging photographer retorted, clearly familiar with the importance of the right angle.

The room was quickly filling up as guests made their way downtown from the Fifth Avenue Uniqlo flagship, where they had just toasted Carine Roitfeld’s third collaboration with the mass brand. “I’m so excited,” Stuart Vevers exclaimed, greeting the French editor with a kiss on the cheek as she waded her way through the dense crowd.

Studenberg summed up the Uniqlo x Carine collection: “Chic and sexy and sophisticated. I mean, that’s very her,” he said. “I think it’s inspiring, because it’s opening stylists and designers working with these bigger mass brands. Mass doesn’t have to be something bad. It’s a great way to give everyone a piece of what your message or work is.”

“Actually afterward, we were thinking of her collaboration, and we were, like ‘Oh, we should do a collaboration with them on all the cashmere, and all our cozy things,'” Targon added. “That’ll pay dollars,” Studenberg agreed.

“Laura was a big shopper of the first collection, so she racked in a few things, dropped it in her apartment and came straight here,” said Garcia, referring to his Oscar de la Renta and Monse codesigner Laura Kim, who was taking a moment to sit down amidst the activity.

Around midnight and just as dessert was being served, Roitfeld began making her way toward the exit, but offered some reflection on how she was feeling in the wake of the collection’s launch. “Honestly, very proud the first time when I took the escalator, and I saw Uniqlo with this girl looking very like me, and my name underneath,” she said. “It’s very me — it’s very, very me. It’s all my wardrobe, it’s all my proportions, it’s all my way to mix. It’s an attitude.” Also, “Everything has pockets because I’m shy, and I like to put hands in my pockets.”

While there isn’t a fourth collection actively in the works, as Roitfeld optimistically put it, “There’s an expression Americans say, ‘monkey see, monkey do,’ no?”