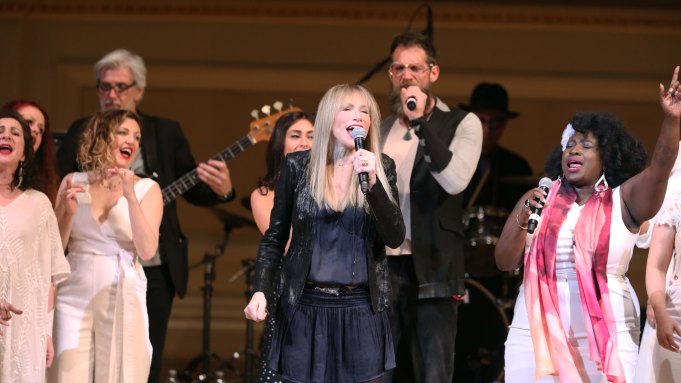 “When society is in trouble, the arts really get going,” declared Philip Glass following the 31st annual Tibet House Benefit Concert at Carnegie Hall in Manhattan on Saturday evening. “This is a very good period for the arts.”

The renowned composer, who cofounded the cultural organization in 1987 with Columbia University professor Robert Thurman, Richard Gere and others to promote and preserve Tibetan culture, has seen the role of Tibet House expand in recent years with changes to the political and social climate.

“There’s a 60-year cycle,” opined the 81-year-old musician. “In 1960, we had terrible politics with [Joseph] McCarthy and the witch hunts. It was a very repressive government, but the arts were going like crazy. It’s the same thing today.”

Tibet House president Thurman agreed. Well, “sort of,” explained the writer and academic. “I think it’s best if [artists] make people feel more responsible. Artists are there to cheer people up, give them a feeling of responsibility and inspiration rather than to express a particular political view. Sometimes it complicates things if it comes to be thought that all artists have just one view.”

But the evening’s performers — who included Patti Smith, Angel Olsen, Alabama-based band St. Paul and the Broken Bones, Ben Taylor and Tibetan folk singer Techung — stood united in using their talents and voices to illustrate a politically charged message. One of the evening’s most poignant moments came at the show’s finale when the all-female Resistance Revival Chorus joined Carly Simon onstage for a specially arranged rendition of her hit “Let The River Run.”

Simon dedicated the Oscar-winning song to the undocumented immigrants — the so-called “Dreamers” — who were brought to the U.S. as children and are facing possible deportation under the Trump administration. While others from the lineup made their way to a gala after party at Gotham Hall, Simon as well as Patti Smith decided to skip post-show celebrations. Honorary chairs Maggie Gyllenhaal and husband Peter Sarsgaard were also expected, but were forced to stay home due to a household bout of the flu.

“I can’t get over that we sang with Carly Simon,” exclaimed musician and activist Ginny Suss, who was instrumental in organizing the Women’s March on Washington last year as well as helping to found the Resistance Revival Chorus. “She is entitled to be a giant diva if she wanted to be but she is not. She understands the power of her lyrics [to ‘Let the River Run’] have now taken on a new meaning.”

Given the current state of affairs in Washington, D.C., and around the world, Suss believes it is “important [Tibet House] put a political stamp on this night in a way,” citing the organization’s “mission of world peace” as the evening’s most important message.

Musician Kate Kay Es, who played keyboard for Kesha during her most recent North American tour, made her Carnegie Hall debut at the benefit concert. The Australian-born singer, who will release her debut EP next month, described her part in the nearly 60-person women’s chorus as “phenomenal,” adding, “These women all have vastly different backgrounds, work and careers, but all come together for this common mission. That’s what this is all about.”