Herrera Girls in the MoMA Garden at Night 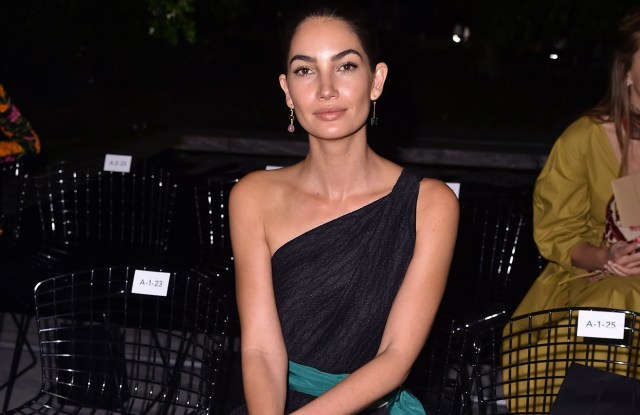 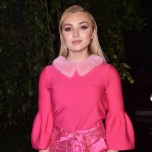 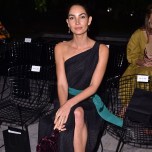 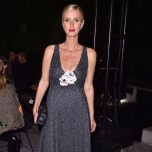 “I just walked for Jason Wu and now I get to sit here for Carolina Herrera,” Aldridge said before the show. “I like to do both — they’re such different experiences. This is much more relaxed and walking is so much fun because you get so much adrenaline.”

Herrera’s move to an evening show called for a slightly different look than the usual Monday morning dresses her guests often wear. “I love a nighttime show,” Aldridge said. “Day to night — it’s always nice once you throw your hair back and you throw on a lip, it goes very nighttime. I feel like my dress could go day to night easily. There are just little tricks you can do.”

Aldridge, a Victoria’s Secret veteran, offered advice to the first-timers who took to the streets in New York in recent weeks auditioning for the show, which this year heads to Shanghai. “Just always show your personality — they book girls so much on their personalities and confidence so that’s I think the most important thing,” she said.

Monaghan met Herrera a few months ago in her studio and was struck by, yes, the fashion, but also her way with her grandchildren.

“It was really incredible — she had her granddaughters with her, so it was fabulous to see a woman who has built something so wonderful and beautiful and iconic, but also being incredibly maternal and enjoying her family time with her children in the office,” Monahan said. “I was thinking to myself ‘what an incredible woman that her grandchildren get to look up to and see such a strong creative woman in her element.’ For them to be able to witness that is really special.”