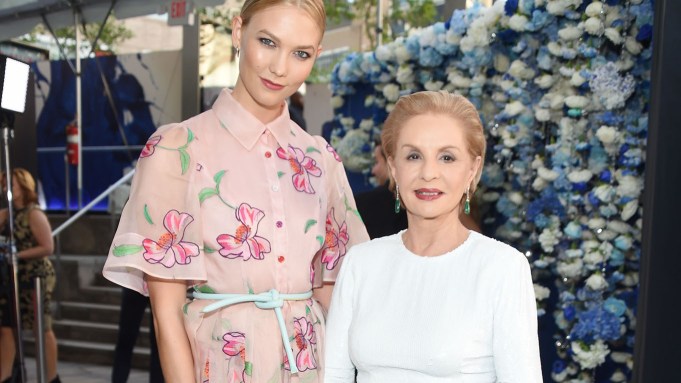 It was surely the most fragrant room in New York.

Beauty industry executives, perfumers, models and celebrities crowded into Alice Tully Hall at Lincoln Center on Wednesday evening for the annual Fragrance Foundation Awards. Actor Joel McHale presided over the evening, joking about the popped button in his Tom Ford suit, Ford’s absence despite the brand’s wins, in an auditorium he described as “smell[ing] like the ground floor of a Nordstroms.”

Harry Fremont was honored with the lifetime achievement perfumer award, while Marc Puig was inducted into the hall of fame. Outgoing Fragrance Foundation president Elizabeth Musmanno was also honored with a standing ovation — Wednesday was her last awards ceremony before she moves on to other projects.

Before he stepped on stage Fremont, a Firmenich master perfumer, walked the red carpet, touching on some of the same industry points that he mentioned in his speech — mainly, that the industry could do a better job reaching certain consumers.

“The biggest mistake we are doing today is we are targeting the same consumer all the time,” Fremont said — meaning those who wear fragrance every day. “But there are a lot of consumers out there that are only wearing fragrance for special occasions because they’re a little bit afraid of fragrance because they don’t think it’s so appropriate for their lifestyle,” he said.

On stage, Puig thanked Herrera and his family. “It’s a question of imagination — as long as we bring excitement to the category, we’ll do well,” he said. “We learned the hard way that when you don’t do so you can get into trouble…we see plenty of opportunities in this industry, we want to fragrance the world.”

John Varvatos, who took home Fragrance of the Year Men’s Prestige for Artisan Blu and Men’s Packaging of the Year for Dark Rebel Rider, said he has a new fragrance in the works that won’t be ready for a year or so and is also mulling over other projects.

“The candle thing is a fun thing, and it’s an interesting thing — in my own stores it’s something that will do very well, but it’s a tougher thing to merchandise in the department store world…we also are exploring the whole skin-care category as well, just for men,” Varvatos said.

He showed up to the event sans scent. “I’m not wearing fragrance, I figured there’d be too many things combatting each other tonight,” he said.

He’s in the middle of filming the second seasons of Netflix hit “13 Reasons Why,” he said, and when he got the Paloma Spain look book he was inspired by the “fantasy makeup” matched with his silver and navy polka-dotted skirt suit from the brand. “I figured we’re doing a beauty awards thing, a fragrance awards thing, so why not have fun.” Dorfman’s not one to wear such a makeup look all the time, he noted. “It’s rare, it’s just when I feel inspired to.”

Actress Dascha Polanco of “Orange Is the New Black” said she’s been into fragrance since she was young, stealing her mom’s Lancôme Tresor from time to time. She showed up to the red carpet in a voluminous Marni creation covered in flowers and held together with an interior rope.

Holmes stopped by the awards before she heads to Montreal to work on “The Gift,” a film she’s in with Patrick Stuart (later this year she said she’s directing a film called “Rare Objects”). She was wearing Jo Malone London Orange Blossom. “That’s usually my go to,” she said.