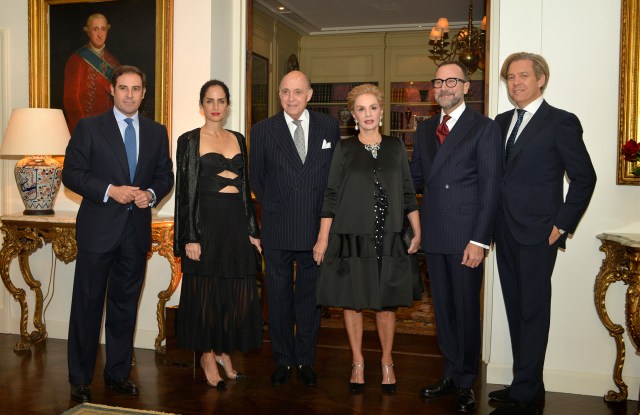 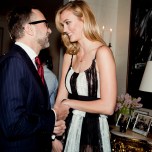 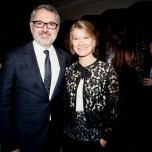 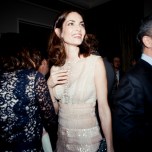 MADRID — “Absolutely speechless: I did not expect this,” Carolina Herrera remarked as she gazed at the art and flower-filled party at the American ambassador’s residence here to mark her 35 years in the fashion business.

Regarding his pending departure in the wake of Donald Trump’s election sweep, Costos demurred: “The exit strategy has yet to be determined.”

“We’ve been so lucky; everybody has stayed here — we have Karlie [Kloss] tonight, the Obamas, John Kerry, Anna Wintour, Harrison Ford, Sarah Jessica Parker. We love it here,” Smith said of the residence, musing that the couple might buy a Madrid pied-à-terre for the future. “Please write that I am dangerously thin,” he added with an impish grin.

Guests included heavy financial hitters like Marc Puig, chief executive officer of Barcelona-based Puig and owner of the Herrera brand, plus a bevy of socialites, royal relatives, designers and models.

In a mustard jacquard blazer and roomy black pants, Madrid designer Carmen March, who resurrected her women’s wear label in June, said, “The first collection sold fantastically; we’re working on the second one which like before, we’ll present in Paris.”

Arnaud Maillard and Alvaro Castejón, co-creative directors of Alvarno, talked up their launch of a capsule Mickey Mouse collection as part of their ongoing collaboration with the Disney company to benefit a local children’s charity. The duo was due to attend a premiere here of Tom Ford’s “Nocturnal Animals.”

The next morning, Herrera – in a plaid skirt and white shirt (“People think I live — literally — in white shirts,” she laughed) —presented her book “35 Years of Fashion” to the media at the stately downtown home of legendary banker Alfonso Fierro.

Prior to the presentation, ceo Puig told WWD, “Spain is one of the [Carolina Herrera] brand’s most important markets after the U.S., and depending on the product, other major markets are Latin America, the Middle East and Russia.”

In the Eighties, Herrera was discovered by Fernando Aleu, then head of Puig in the U.S. “He liked the way she smelled,” Puig said. They inked a deal to produce and distribute her fragrances and in 1995, became official partners. Puig lauded “the great luck to work with such an elegant person, and I hope to do so for many more years.”

Herrera returned the compliment. “Fashion and fragrance are totally different. I am so lucky to have found the Puig group,” she said, adding that one of the keys to success is to “keep your eyes open, do something new to please the eye and be open to change. To change your mind in an instant is feminine instinct. Fashion isn’t easy; it’s hard work and complicated, but it’s been a wonderful journey.”