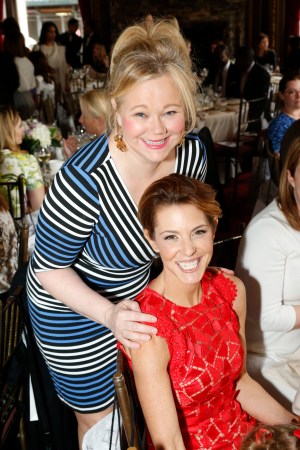 The Metropolitan Club may have been a gentlemen’s club when it was founded by J. P. Morgan in 1891, but on Thursday afternoon the space was teeming with women. Girls Inc. had taken over the historical venue to host its spring luncheon, drawing out a lineup of well-heeled and charitable women for the cause: Tracy Anderson, Laurie Gelman, Katie Lee, Julie Macklowe, Vanessa Nadal, Denise Rich, and Kelly Rutherford among them. Caroline Rhea, donning a springy nautical-striped dress, served as mistress of ceremonies.

“She lights the room up, she’s a dynamo,” Girls Inc. executive director Pam Maraldo remarked about recruiting the comedian for hosting duties. “I said, we can’t do this without Caroline.”

The organization provides support for more than 4,000 at-risk girls around the city, and boasts a matriculation rate of more than 90 percent for the high school seniors in its programs. In addition to raising money for Girl Inc.’s initiates, the lunch also honored MSNBC daytime anchor Stephanie Ruhle and Kirkland and Ellis LLP for their contributions to the organization.

“On a year when we might see our next president being a woman, to be honored that same year is a dream come true for me,” Ruhle remarked before taking her seat, her young daughter in tow. “I think Girls Inc. is so important because it’s simply about giving girls the chance,” she continued. “We spend so much time trying to get an ‘edge.’ If we stop focusing on the ‘edge’ so much and started giving everybody a chance to start from zero, we’d be coming from such a better place. What Girls Inc. can do is give girls the power and confidence to say ‘I think I can do it.'”