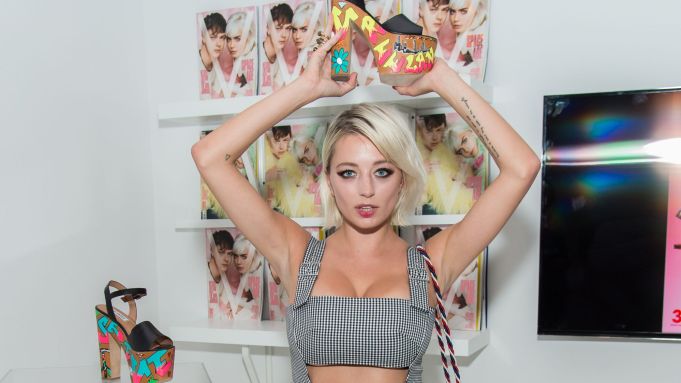 In a crowd of stoic, professionally beautiful partygoers, Caroline Vreeland is talking about taking a break from the social scene and social media.

“My plan is to just go dark,” said Vreeland, whose great-grandmother and famed Vogue editrix Diana Vreeland passed away when the budding multihyphenate was only two.

Social media breaks are popular among the celebrity set, with everyone from Kanye West to Anne Hathaway stepping away at stretches from platforms such as Twitter and Instagram, where Vreeland has roughly 7,100 and 240,400 followers, respectively.

Vreeland may not be the most likely candidate for a web hiatus, not least because she mentioned the prospect as part of plans to finish a delayed EP in Tuscany, but on Wednesday night, she was in professional party mode at a V Magazine fete celebrating her new gig as the face of Steve Madden’s global Fall campaign.

After coming out of a quick photoshoot where Vreeland said the photographer immediately pulled the straps of her stomach-baring houndstooth overalls down, the model-singer described Madden, who had not yet arrived at the party, as “the adult male version of me.”

“In the fashion world, it’s not always easy because there’s a lot of brands that [won’t work] with me because I’m too risque or I’m too outspoken or whatever,” Vreeland said. “There’s a lot of jobs I don’t get, so for Steve to get me and want to [work] with me, it meant a lot.”

Madden in a statement described Vreeland as part Marilyn Monroe, part Amy Winehouse and “my kind of girl.”

While Vreeland appears to have little in common with two of celebrity culture’s most tragic legends, beyond beauty and singing aspirations, she’s already looking forward to more work with Madden.

Although she’s set to be the face of shoe brand for fall 2017, and described the platform styles showcased in a pre-fall campaign video as “treacherous,” Vreeland is hoping to soon collaborate on a line of Steve Madden shoes and add designer to her résumé.

But before being pulled into a congratulatory hug by fellow fashion progeny Anna Cleeveland, Vreeland reiterated her plans for a social break.