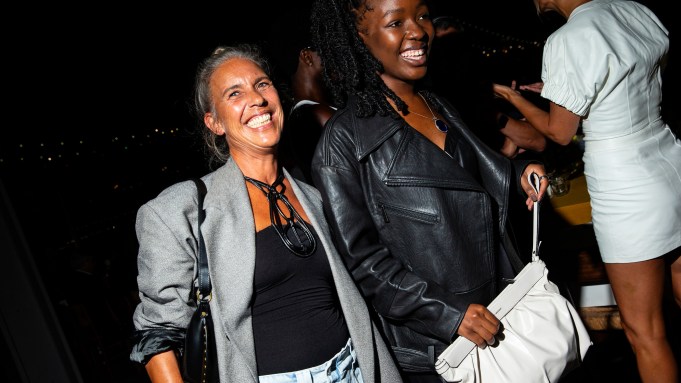 Leave it to Isabel Marant to find the coolest new French place in New York for her fashion week dinner: Jean Georges Vongerichten’s The Fulton at Pier 17.

No one could much see anyone in the dark outdoor waterfront setting, not that the designer minded. She wanted the lights of New York to shine.

“I love the ‘Welcome’ sign,” she said of the rooftop marquee across the river in the distance, atop the Jehovah’s Witnesses’ former headquarters turned office-and-retail complex in Brooklyn Heights.

Marant was last in New York to film an episode of “Next in Fashion,” with Tan France, who was among her guests for dinner, which turned into dancing under the designer’s very own disco ball.

The occasion was to celebrate her biggest flagship yet, which opened on Madison Avenue in July.

“It’s been a long time since we did anything in New York and we had a good excuse, so here we are,” said the brand’s chief executive officer Anouck Duranteau-Loeper. “The American women really love the brand, and the market has always been important to us.”

The model set was out in full force, including Carolyn Murphy, Hari Nef, Lily Aldridge and Alton Mason repping the brand’s menswear and womenswear, while nibbling on seafood plateaus, sashimi, octopus salad and French fries.

Imaan Hammam reprised the sparkly crystal embellished top and pants look she wore to walk the fall 2022 Isabel Marant runway in Paris, twinning with the necklace lights on the Brooklyn Bridge behind her.

“What I love about Isabel is she is so bada–…she’ll come backstage and say, ‘I effing love you guys,’ and she’s smoking a cigarette,” Hammam said. “I work with her a lot and she’s so secure with herself.”

A lesson to live by.